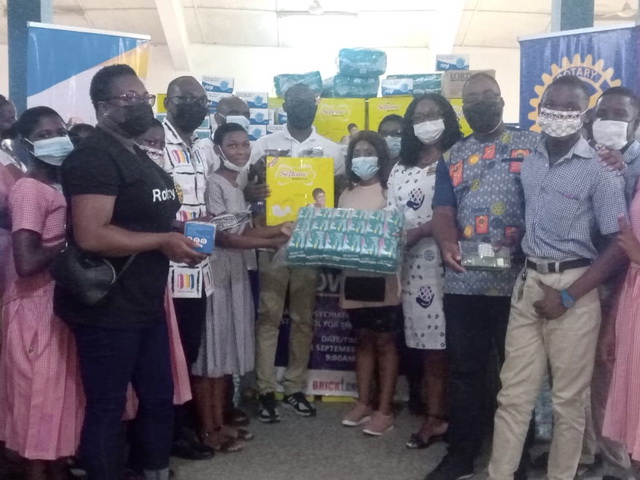 The items included about 100 boxes of the Software sanitary towels and about 60 packets of Cute Woman sanitary pad, face masks and clothing.

The President of the Rotary Club of Accra-Labone, Mr Emmanuel Anum Mensah said the club had initiated the project of supporting the mentally ill with sanitary towels five years ago.

He observed that mental health and its stresses and challenges posed on individuals and the institutions that provide mental health care required support that went beyond what the government could offer hence the decision by the club to support.

He said the Accra-Labone Rotary club, the initiator of the project this year, sought support from other sister chapters to make the support bigger. 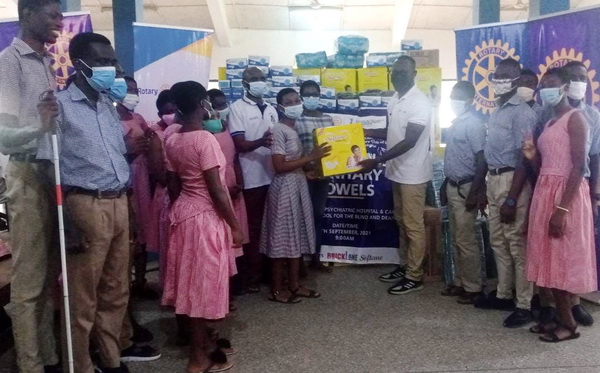 Beneficiaries
Already, he said the Patang and Accra Psychiatric hospitals had benefited from the project in previous years.

At the Ankaful Psychiatric Hospital, the administrator, Ms Catherine Quarshie who received the items assured the members that the items would reach the beneficiaries.

She said sanitary hygiene of mentally ill women and girls was a critical aspect of their wellbeing, adding that the gesture would go a long way to help manage the patients.

She explained that some of the patients were neglected by family for several months making it difficult to cater for them. She said the donation was commendable.

Cape Deaf/Blind
At the Cape Coast School for the Deaf and Blind, the club also presented shaving sticks and boxer’s pants for the male students.

Mr Mensah noted that hygiene habits and behaviours were crucial for all and especially for adolescents with special needs, adding that the club would continue to do what was within members’ means to support the students.

She also advised the males not to tease girls in their period who accidentally soil themselves.
"How would you feel if your sister is being mocked because of something like this? Don't tease the girls when they soil themselves during their periods," she said.

She noted that the role of women in procreation and menstruation should not be a source of stress and embarrassment for women and that girls’ menstruation was not evil.

She called for support for vulnerable girls and women, saying the lack of appropriate hygienic materials for use during their menses had pushed some into wrong relationships.

The headmaster of Cape Deaf/Blind, Mr Abraham Annang Yemoson thanked the club for the gesture and assured that it would be put to good use.