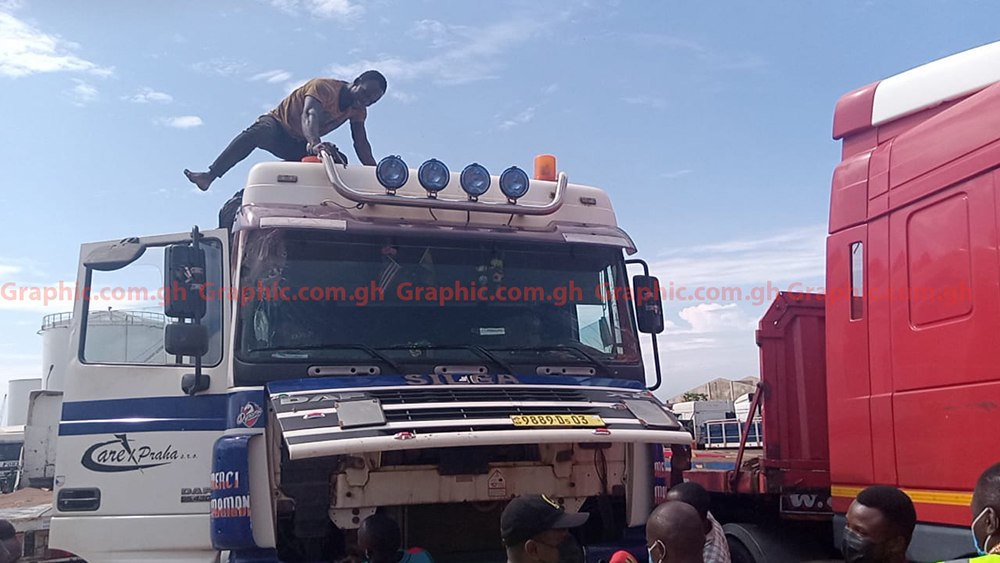 A truck with illegal additional lamps as identified by the authorities during the sensitisation exercise in Tema. Picture: BENJAMIN XORNAM GLOVER

The National Road Safety Authority (NRSA) will this month begin removing illegal lamps from vehicles to curb the dangers they pose to other road users.

The exercise, which will lead to prosecution of offending drivers, will be carried out in collaboration with the Driver and Vehicle Licensing Authority (DVLA) and the Motor Traffic and Transport Department (MTTD) of the Ghana Police Service.

The additional lamps usually affixed to the roof of trucks and other parts of vehicles are said to be in excess of the number required.

Speaking to Graphic Online in Tema Tursday after a sensitisation exercise for haulage drivers and other transport operators at the Tema Port, the Head of Regulations, Inspection and Compliance of the NRSA, Mr Kwame Kodua Atuahene, said the use of unprescribed, toxic killer lamps by some drivers contrary to Regulation 65 of the Road Traffic Regulations, 2012 (L.I. 2180) was exposing other road users to crashes, especially at night.

Mr Atuahene said although the power to enforce the law came into effect on September 30, 2021, the NRSA and its partners, including the MTTD, had devoted the first two weeks of October to sensitise drivers and vehicle owners across the country to the need to voluntarily remove the unapproved lamps.

Mr Atuahene said the NSRA had been engaging the Ministry of Energy to ensure that the streetlights on the roads stayed up.
He further indicated that while the NRSA was going on with such engagements, the authority could not look on and allow the drivers to continue to use unprescribed lamps.

“While the drivers seek their own comfort, they create a lot of discomfort for many others, so we must figure a way out. For now, the way to go is to come under the provisions of the law to take those lights down while we put a bit of pressure on the other agencies to also step up their efforts,” he said.

The Greater Accra Regional Director of the NRSA, Mrs Catharine Hamilton, said through the exercise, her outfit would educate haulage drivers, operators of commercial buses and other road users on the need to remove the unprescribed lamps to curb the risk they posed, especially at night.

The Vice-Chairman of the Ghana Haulage Transport Union, Alhaji Mohammed Abubakari, expressed joy about the exercise and pledged the commitment of the haulage drivers to ensure compliance.

He said the drivers fully appreciated the fact that the use of high beam fog lights created a glare for drivers of oncoming vehicles and contributed to road crashes.

He explained, however, that the bad condition of some of the highways, the absence of road line markings and poor visibility on the highways were factors that forced some drivers to fix those lamps.

A representative of the Burkinabe haulage drivers operating at the Tema Port, Mr Abdoulaye Sawadogo, urged his fellow drivers to adhere to the new regulation.