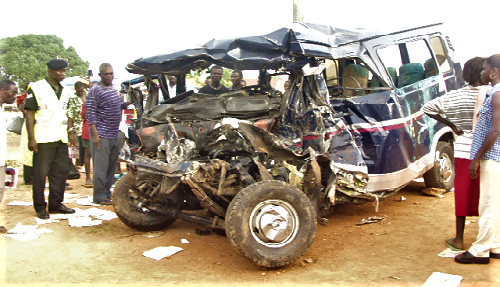 The mangled remains of one of the vehicles involved in the Mankranso accident which claimed 19 lives
30.5k Shares

A total of 1,140 people have died through road accidents, while 6,620 others sustained various degrees of injuries, between January and May this year.

Thus, on average, accidents have claimed more than four lives a day within the five-month period.

According to the National Road Safety Authority (NRSA), in all, there were 6,472 road crashes involving 10,858 vehicles within the period under review, a 4.67 per cent reduction in figures over the same period last year when there were 6,789 accidents.

The acting Director-General of the NRSA, David Osafo Adonteng, who disclosed this in an interview with the Daily Graphic in Accra, said although the figures represented a marginal reduction in accidents, there was still concern over the number of precious lives that were lost to road crashes.

According to the NRSA, the Greater Accra Region recorded the highest number of accidents registering 2,735, with the Ashanti and the Eastern regions registering 1,496 and 709, respectively.

The Central and the Western regions recorded 448 and 305 crashes, respectively, resulting in 96 and 52 deaths, in that order.

The Upper East, Upper West and Savannah regions had 61, 44 and 42 accidents, with 19, 22 and 21 deaths, respectively, while the North East and the Oti regions registered the lowest numbers of 31 and 23 crashes, respectively, with 14 and 20 deaths, in that order.

Mr Adonteng attributed the decrease in the number of crashes to public educational campaigns — Arrive Alive and Stay Alive — which were launched in 2020 and 2021.

He said that although the number of fatalities was alarming, the decrease in accidents was significant, adding: “It is motivating us and strengthening our thoughts that if we do it collectively, comprehensively and vigorously, we will get the intended result of reducing road crashes.”

Mr Adonteng said the Motor Traffic and Transport Department (MTTD) of the Ghana Police Service, through the Police Action Against Rider Indiscipline (Operation PAARI) and the Public Invisible Eye (PIE) traffic operations, also contributed to the reduction in the numbers.

"Drivers were advised and educated on the dangers of road indiscipline, and we can all see the impact it has made,” he said.

He said his outfit and other stakeholders would ensure the campaign was not only intensified but also sustained to ensure that motorists adhered to road traffic regulations and standards at all times.

“The campaign is still on; we are campaigning every day on radio and television, including our outreach teams spread across the country moving and engaging the public," he added.

Mr Adonteng also said the NRSA intended to install ‘lollipop’ stands in schools across the country by September this year to aid children in crossing roads to prevent pedestrian knockdowns.

He also stressed the issue of the leaving of breakdown vehicles on roads and gave an assurance that measures were being put in place to clear such vehicles from the roads, since they had been identified as one of the causes of accidents.

He called on all — the media, civil society organisations (CSOs) and other stakeholders — to support the NRSA to effectively carry out its mandate of saving lives and property.

"One institution cannot do everything; it is a collective responsibility and national call. The NRSA is just the lead in this campaign, but it behooves us all to come on board and kick out road crashes from the country," Mr Adonteng said.