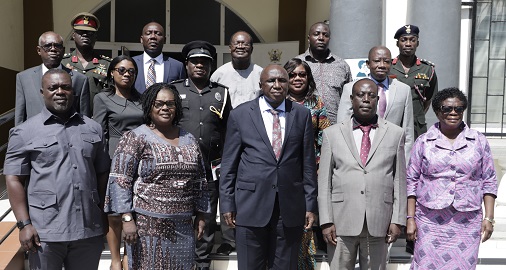 The Minister of Interior, Mr Ambrose Dery has inaugurated the governing board of the National Commission on Small Arms and Light Weapons (NCSALW).

The Minister in an address tasked the new board of the National Commission on Small Arms and Light Weapons to put in place robust measures to effectively control the illicit trade of small arms and light weapons in the country.

The Minister said the illicit trade of small arms and light weapons were potential threats to Ghana's reputation as a beacon of peace and democracy in Africa, urging the 15-member board to oversee the implementation of public awareness campaigns, especially at border communities.

"In most of the cases their acts of violence target civilian populations, which is why I am charging the Board of the Small Arms Commission to put in robust measures to effectively control the illicit. trade, manufacture and flow of small arms and light weapons into our country.

He also called for enhanced and sustainable preventive approaches to raising the alertness and the capacities of the security agencies especially at entry points into our country.

"The Commission's activities then become critical in complementing the activities and operations of the security agencies in sustaining peace and security. You need to raise awareness among the populace especially Border Communities and be vigilant in gathering information on illicit arms trade, manufacture, and smuggling to enable the Law Enforcement Agencies to act swiftly".

Prof. Manso, who spoke on behalf of the NCSALW Board, thanked President Nana Addo Dankwa Akufo-Addo and the government for the trust reposed in the members.

He said members of the board had taken note of the challenges, pledging their commitment to work with the Ministry to achieve their targets.

Prof. Manso stated that the country would benefit from socio-economic development if the proliferation of small arms and light weapons were curbed.

He also expressed gratitude to the security agencies and the media for continuously supporting the activities of the NCSALW.