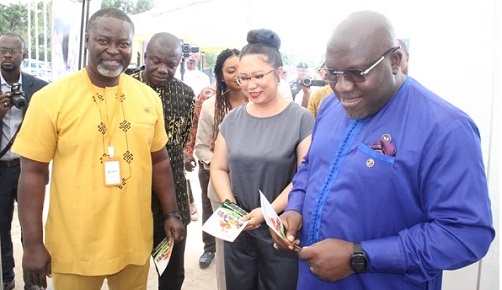 The Chairperson of Torchbearer International Agricultural Science and Technology (TIAST), Madam Lisa Hao, has urged players in the agricultural sector to design a reform to help the sector exploit its agricultural potentials in Ghana and Africa as a whole.

She lamented that despite the agricultural sector being the backbone of Ghana and Africa's economy, and a higher contributor to the country's Gross Domestic Product (GDP), it has faced challenges with value addition which is very critical in the world market.

"Agriculture is so far Africa's most economic activity. It contributes on average between 60 - 62 percent to Africa's GDP; and over 60% the value of export to each country. Agriculture has huge socio-economic impact on Africa. Small holder farmers account for more than 60 percent of the population in the sub-Saharan Africa, and agriculture accounts for around 23 percent of the constant GDP. Despite this, Africa's agriculture potential remains mostly unused; with the post factor of joblessness, food related issues, and low income, the first difficulty is how to manage those effort to create and promote sustainability. Both in the field and across the economy, African farmers and their organisational leaders are critical players in addressing those extreme difficulties and putting in place the necessary reforms on farms in regions, and the way agriculture business are conducted".

The conference which was themed; “Achieving Agricultural Industrialization through the Eastern Commodity Satellite Markets: Financial and Technical Support from TIAST”, was organised by the Eastern Commodity Satellites Market in collaboration with TIAST to "boost agricultural industrialisation, contribute to local economic development of the districts, promote value addition to agricultural produce, enhance the supply of good quality agricultural produce for processors and consumers, and link small scale farmers and processors to markets".

The Chairperson of TIAST lauded the Eastern Region for its agricultural prowess and labelled it as carrier of the future of agricultural sector. She indicated the commitment of TIAST to the industrialisation drive of Ghana and Africa as a whole.

Notably, she said TIAST would offer Financial and Technical supports to farmers and industries that are interested in processing products for consumption and exports.

He acknowledged the shift in agricultural drive from raw material to value addition and urged the TIAST Group to also offer support to small scale processors in the region in bid to promote the industrialisation drive in Ghana and Africa as a whole.

"Throughout my engagement with the TIAST group prior to this fair, I have consistently reiterated the fact that, even though their main targets are large scale investors, there is the need to urgently design a concept that will embrace the small scale processors playing a key role in our own Eastern Commodity satellite markets. There is a paradigm shift in agriculture from just primary production to value addition. The only way a small holder farmer can maximize profit in a perfectly competitive market where the market dictates the price is by product differentiation through value addition, branding and packaging with special emphasis on quality," he said.

Mr Acheampong entreated small scale processers and farmers to patronise the exhibition stands to learn and build network while purchasing large quantities of commodities at the commodity satellite market which was stationed at the Koforidua Jubilee Market.