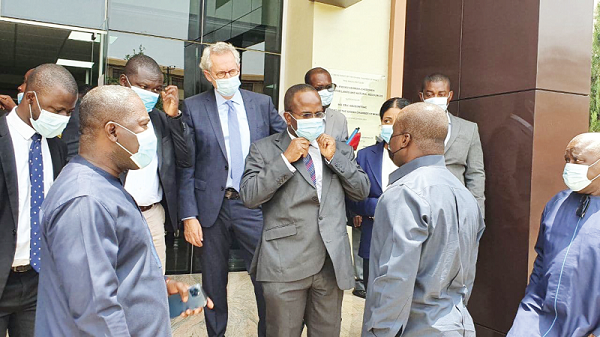 Mr Samuel A. Jinapor, (back at camera), in an interaction with Mr Eric Asubonteng (left), the President of the Chamber of Mines, and Mr Sulemanu Koney (middle).Picture: DELLA RUSSEL OCLOO
30.5k Shares

The Chief Executive of the Ghana Chamber of Mines, Mr Sulemanu Koney, has appealed to the government to take a second look at the withdrawal of state security personnel from mining sites.

He said the withdrawal was creating insecurity in the mining sites and their host communities, and could erode investments and also reduce the competitiveness of companies operating in the country within West Africa.

In an interview with the Daily Graphic after a closed-door meeting officials of the chamber held with the Minister for Lands and Natural Resources, Mr Samuel Abu Jinapor, in Accra last Tuesday, Mr Koney said although appreciable progress had been made in the sector, a lot more ought to be done to deter crime and effectively safeguard critical installations in ensuring that the country remained the frontrunner of mining investments in the region.

He said while the government had remained committed to providing adequate security to protect investments in the mines, there would be the need for specialised training for such officers to advance the level of protection since mining sites had serious threats that could not be repelled by internal security arrangements.

“We have had some engagements with the Inspector General of Police (IGP) and are also in the middle of signing a Memorandum of Understanding (MoU) for the deployment of personnel given that illegal miners also continue to encroach on the concessions of companies,” Mr Koney said.

Mr Koney, who was also worried that recent policy developments were eroding the country’s competitiveness relative to other countries within the sub-region, expressed a wish that a more beneficial relationship could be bridged between the sector and the government to ensure steady returns, as well as the state also making good returns on its natural endowments.

Burkina Faso, he noted, became the largest beneficiary of planned exploratory investments in 2019 with an estimated capital of $132 million, “making that country becoming a hotbed for mining investments in the last four years.”

He said the country’s enviable record of being the preferred destination for mining investments had become precarious owing to unwarranted taxation and uncertain policy environment.

“In view of the developments, it behoves on the duty bearers to fashion out policies that will not only reposition Ghana as a preferred destination but also a jurisdiction with a competitive return on mining investments in the sub-region,” Mr Koney said.

Touching on delays in the review and approval of permits by the Environmental Protection Agency (EPA) and other allied agencies connected to mining, Mr Koney emphasised that they were negatively impacting raising investment capital for projects.

He said every major activity of the sector required one permit or the other, but added, “there is no predictability around their issuance for investments to come in or continue, and multinational firms are often forced to rout their investment opportunities elsewhere.”

The chamber, he said, would continue to liaise with the EPA on the introduction of a permit tracker technology to allow for a remote for the review of applications.

He appealed to the minister to complement the chamber’s efforts so that together with the Ministry of Science, Technology and Innovation, the human resource of the EPA would be improved.

The minister, in a brief interaction with the media, said the familiarisation visit was to collaborate in building a sustainable mining industry.

“One fundamental engagement of this meeting is that the chamber and the ministry have resolved to hold consultative meetings to ensure more beneficial agreements between government and the sector,” Mr Jinapor said.