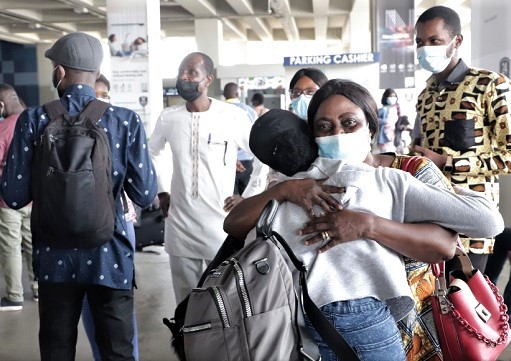 It was all joy for some family members of the first group of students from Ukraine as they welcomed the students with warm hugs and laughter. Picture: EDNA SALVO-KOTEY Follow @Graphicgh

Parents and relatives of Ghanaian students in Ukraine have appealed to the government to consider putting in measures to enable the returnee students, especially the medical students, to continue their education in the country.

They said some of them had been studying for between six and 10 years in Ukraine and were left with a few months to complete their education when the Russian invasion of Ukraine occurred.

It would, therefore, not be in order for their education to be truncated just because of what had happened, the parents and relatives said.

They called on the Ministry of Foreign Affairs and Regional Integration to immediately constitute a committee involving other ministries to see what could be done for the students to continue their education on their return.

One of the parents, Dr Collins Tay, whose daughter is in her fourth year of a six-year medicine programme, said the University of Ghana Medical School could be called in to help organise some form of training for them, depending on the level the students had reached so that they could be integrated into the system.

He said some of the students studying in Ukraine were refusing to come home, probably because they did not know of their fate after their return.

The parents expressed their concerns during interactions with the Ministry of Foreign Affairs and Regional Integration at the Accra International Conference Centre.

That was after the first batch of Ghanaians from Ukraine had arrived at the Kotoka International Airport (KIA) in Accra on Monday, March 1, 2022.

They arrived in Accra aboard a Turkish Airlines flight from Istanbul, Turkey, and Qatar Airways via Doha, the capital of Qatar.

The government has entered into an agreement with Qatar Airways and Turkish Airlines to evacuate Ghanaians stranded abroad as a result of the ongoing Russian invasion of Ukraine.

The move is part of plans being explored by the government to evacuate Ghanaians who have been able to cross the Ukrainian border to neighbouring countries, such as Poland, Romania, Hungary, Turkey and Slovakia, and are willing to return home.

Students held up in bomb shelters

Some parents who have their children or relations studying at Sumy University, an area close to the Russian border considered one of the hotspots of the Russian invasion of Ukraine, expressed concern that their children there were held up in bomb shelters where they had run out of food.

They, therefore, wanted to know the attempts the ministry was making to evacuate such students.

The parents also appealed to the government to organise psychological counselling for the students who were arriving, especially because some of them might be traumatised by the experience of the war.

Efforts by the ministry

Responding to their concerns, the Minister of Foreign Affairs and Regional Integration, Ms Shirley Ayorkor Botchwey, said the continuing education of the evacuees would be the responsibility of their parents.

However, she explained that the current exercise was meant to evacuate the students. 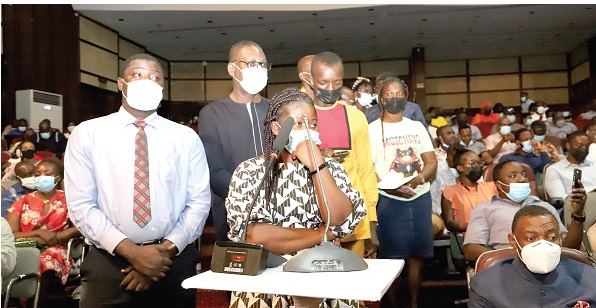 Some of the students answering questions from the media. Picture: GABRIEL AHIABOR

She, therefore, appealed to the parents to allow the government to do that exercise, so that afterwards, it would see what it could do about their education.

“However, for those doing their clinicals (practicals), online studies will be a bit difficult,” she admitted.

On counselling for the evacuees, Ms Botchwey gave an assurance that the ministry was liaising with the Ghana Psychological Association to provide such a service.

Earlier at the meeting, Ms Botchwey had expressed the commitment of the ministry to ensure that all Ghanaians in Ukraine, including those who had successfully exited the country, avoided harm and travelled back home.

She disclosed that as of 5 p.m. last Monday, 527 Ghanaians had crossed the Ukrainian border to various European countries and they would soon be home as long as they were willing to be evacuated, at no cost to them.

She said unconfirmed information indicated that about 1,200 Ghanaians were in Ukraine, with 945 of them being students registered with the National Union of Ghana Students (NUGS), Ukraine, with 29 of them on government scholarships.