Protecting the street child - NGO steps in with education 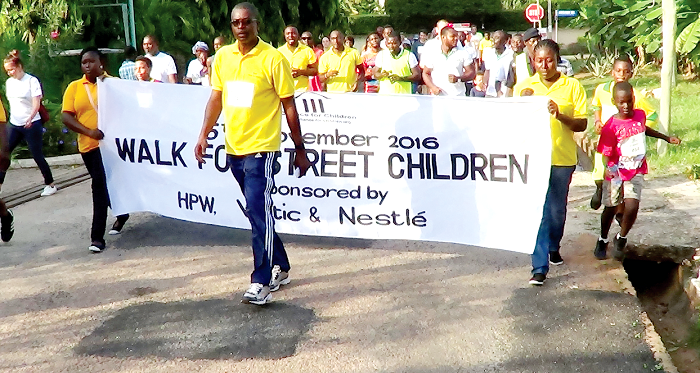 It is not uncommon to see some very young children walking on the busy streets in towns and cities, hawking during school time, begging for alms and assisting persons with disability to beg for alms without any adult protection or guidance.

Many children spend time on the streets during periods that should be spent in school or at home.

What is even worrying is that unscrupulous persons sometimes take advantage of the situation to cause harm to children, who because they are innocent and ignorant are very vulnerable.

To support various efforts to address the situation, a non-governmental organisation committed to the welfare of children, Chance For Children (CFC), on Saturday, organised a health walk in Accra to solicit funds to support street children and raise awareness of the plight of children on the street and the need for positive measures to secure their future.

Speaking during the ceremony, the Director of the organisation, Mr Daniel Awuley Nartey, indicated that a number of children found on the streets were used by unscrupulous people in  society to earn a living, hence the need to deal with the situation.

He, therefore, appealed to the government to protect the rights of the children on the street, pointing out that “When we try to interact with these street children, some threaten us because they think we are depriving them of their livelihood”.

Mr Nartey said most of the street children had been neglected by parents and guardians, and therefore, reaching out to those children would bring some hope to them.

“We help children to integrate ­into society by giving them education, which is the backbone of a country’s development, ”    he said.

Mr Nartey, therefore, urged guardians to take good care of their children because children were gifts from God and they should not be left alone to feed for themselves, since they may end up as criminals in  society.