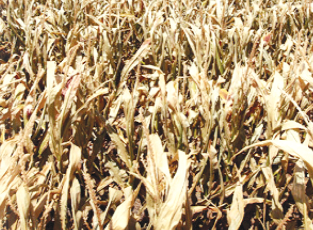 A maize farm seemingly affected by the drought

The Ministry of Food and Agriculture (MoFA) has alerted farmers to a prolonged drought this year that may result in one rainy season for some crops, particularly rice, in the southern sector.

The main rainy season, which is normally from March to July every year, has moved to August and, in turn, shifted the minor season further backwards.

This phenomenon translated into 10 weeks of drought, which occurred between March and May this year, the ministry said.

Statistics available at the ministry from four major farming regions indicate that out of the total maize farmland of 246,075 hectares, 79,002 hectares could not be cultivated due to the drought.

For rice, 6,482 hectares out of the total of 48,936 hectares of farmlands could also not be cultivated due to the unfavourable weather.

The four regions are the Ashanti, Bono, Ahafo and Bono East.

The Technical Advisor of MoFA, Mr Emmanuel Asante Krobea, disclosed this in an interview and said consequently, rice, which was normally produced twice in the year, could only have one production cycle this year, due to an expected drought in September.

In May this year, the Ghana Meteorological Agency (GMet) warned that most places in the southern part of the country were likely to experience prolonged dry weather for the rest of the year.

According to the agency, rainfall for June, July and August was expected to be below average.

The agency further said the July, August and September season could record rainfall below what was normally expected for most places around the coast and some inland areas in the middle parts of the country.

It further projected a high probability of experiencing relatively long dry spells at the beginning and towards the end of the season and most seasonal crops would be water-stressed and likely not to do well, or at best, give poor yield.

Mr Krobea said the ministry would introduce drought resistant and early maturing crop seeds to farmers as a way of dealing with the erratic rainfall pattern in the country.

Additionally, he advised farmers to adopt good agricultural practices such as avoiding the burning of trash after land clearing, as that would help conserve soil moisture.

“The ministry is also putting in place necessary measures to address the current challenge involving the supply of fertilisers to ensure that the input and, indeed, all other inputs were available during the minor season,” he added.

Mr Krobea, therefore, encouraged farmers to plant within the minor season, which would be October and November.

He added that the ultimate goal of the ministry was to invest more in irrigation infrastructure, as the surest means to get round the current unreliable rainfall pattern.