The University of Energy and Natural Resources (UENR) graduated its first batch of students last Saturday with President John Dramani Mahama charging the fresh graduates to focus on self-employment where a lot of opportunities exist.

"Strive to become employers rather than employees," he told the 154 pioneer graduates, who undertook academic programmes in engineering, the sciences, natural resources and agriculture.

The maiden congregation was well attended by dignitaries including politicians, chiefs, academicians, students and parents and  was held  at the central campus of the university in Sunyani. Six of the students who graduated had first class honours.

The UENR, which is the first public university in the Brong Ahafo Region, was established with the core mandate to provide higher education, disseminate knowledge and undertake research related to energy and natural resources.

It was inaugurated on November 17, 2012 with 154 foundation students and the induction of the Vice-Chancellor, Prof. Mrs Esi Awuah.

Currently, the UNER runs 19 undergraduate programmes  and has its School of Agriculture and Technology  at Dormaa Ahenkro.

Currently, the public sector employs about 600,000, and the President said the sector offered very little opportunities for employment.

Attention, therefore, needed to be focused on the private sector and self-employment where opportunities were wider, he said.

The President stressed the need  for self-employment which would see the graduates making a huge impact on the world of work as employers.

The President said looking at the specialised education offered by the university, he had no doubt that with the right approaches, they would excel as employers.

Paying tribute to the late President J.E.A. Mills, whose vision led to the  establishment of the university, Mr Mahama said his administration was advancing that vision to ensure that all regions had public universities with that of the Eastern Region next in line.

Stressing the crucial role the UENR was expected to play in national and global development, the President said "the university must become an epitome of knowledge in science and technology in Africa".

President Mahama mentioned energy and resource management as some of the greatest challenges facing the world today.

"Not long ago, Ghana  faced  severe energy challenges and as President, I promised to fix it," he said, but noted that it was important to secure the nation against future shocks. 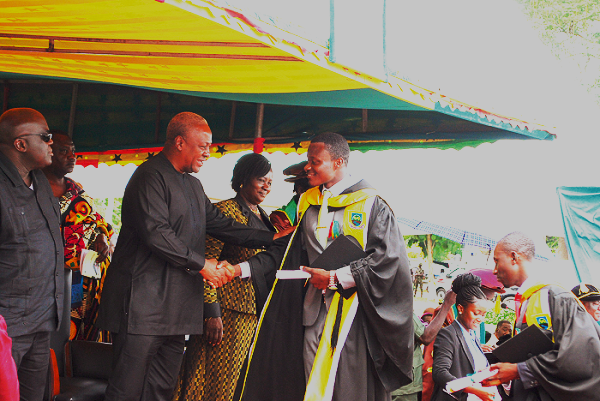 President Mahama congratulating Master Cudjoe Samuel of the School of Engineering at UENR who emerged as the overall best graduate during the maiden graduation of the school.

That was why various power generation projects were coming up to ensure that Ghanaians were provided with the energy security into the future.

President Mahama said although the University is confronted with some challenges, "it has demonstrated formidable strength  within its short period of existence".

" The government has taken note of the challenges and we are taking steps to address them," he said, adding that he had directed the Ghana Education Trust Fund (GETFund) to place "absolute emphasis" on the school in the provision of infrastructure in the short term.

In the medium term, the President said a Korean Exim  facility,  which the government was sourcing, would go to develop the Eastern Region University and the UENR.

He said GH¢10 million out of the GH¢30 million seed money promised for the UENR had been released to the university, promising that the government would make good its promise to release the remaining amount. 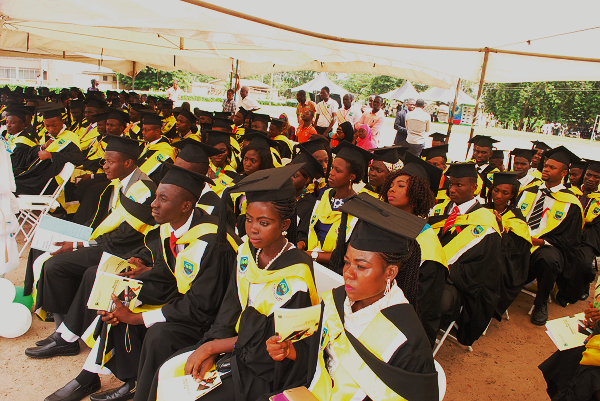 A section of the graduands at the maiden graduation ceremony of UENR. Picture: JAMES BAAH

In a one-hour report on the progress of the university, Prof. Awuah, whose term ends in July this year, said  a lot had been achieved within the short period.

In research, for instance, she said the School of Engineering was engaged in consultancy work with the British  Department for International Development (BFID) on a project called 'Baseline Study of Riparian Communities in the Volta Basin  Ghana', as well as a research project on strengthening innovations and technology dissemination for sustainable development in cocoa and coffee value chains in Western and Eastern Africa.

EORIC was established with the mandate of promoting, facilitating and supporting the acquisition and application of geospatial technologies and data inter-disciplinary research and education.

The CCCGS also aims at promoting, coordinating, facilitating and disseminating  research and development initiatives to deal with the nexus between climate change and gender in Ghana and beyond.