Prez increases soldiers’ allowances and says ‘I keep my word’ 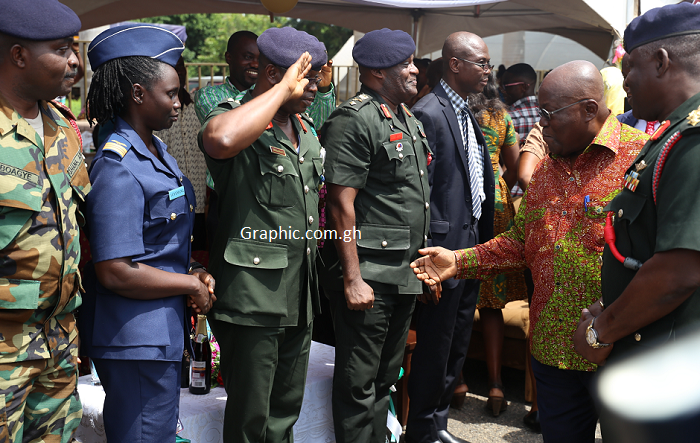 President Nana Addo Dankwa Akufo-Addo has announced an increase in the allowances of Ghanaian peacekeepers from US$31 to US$35, effective January 2017. The decision to increase the allowances is in fulfilment of a manifesto pledge of the New Patriotic Party (NPP) in the run-up to the December 2016 general election.

In realising the vision of a professional, well-disciplined and well-motivated Armed Forces, President Akufo-Addo said during the first few weeks of his assumption of office, an amount of $13 million was released to clear the arrears owed peacekeepers. “As I speak, no soldier is owed any monies arising from peacekeeping duties,” he added.

In addition to increasing the allowances, the President said: “The decision has been taken to ensure that all military personnel, who embarked on peacekeeping missions, would receive their allowances while on tour, and not when they arrived in Ghana after the completion of their duty tour.

“No matter in which part of the world you find yourselves on peacekeeping duties, you will be paid your allowances there. That is the principle, and we are not going to go back on that. Peacekeeping monies are for peacekeepers,” he said.

The announcement by the President of the increase in the allowance and prompt payment of peacekeeping allowance was met with spontaneous applause from the officers, men and women of the GAF who were gathered at the venue, a press statement from the Presidency at the Flagstaff House said.

The President also revealed that a legislative review of the Armed Forces (Amendment) Regulations of 1986 (LI 1332) had begun to extend the serving duration of other ranks from the current 25 years to 30.

The decision to review the legislative instrument, he said, was also in fulfilment of the manifesto pledge of the NPP in the run-up to the December election. ‘’I want all Ghanaians to see me as a man of my word,” he said.

On retooling the GAF, the President said the government would actively support contemporary training methods that would not only keep the officers, men and women of the GAF abreast of international military trends, but would also ensure that they remained the beacon of Armed Forces across the continent.

“We are committed to providing you with modern military equipment, which would complement the training you would receive. The government is also committed to enriching the human resource base of the Ghana Armed Forces by supporting initiatives that will provide further education for soldiers, sailors and airmen to enhance further their skills at protecting our territorial integrity,” he added.

With reference to the Navy, President Akufo-Addo said the commercial production of oil and gas had made the role of the Navy more critical, as they now had the added responsibility of protecting Ghana’s waters and oil fields from new dangers.

The President gave the assurance that the government would allocate the needed resources to the Navy to protect the country’s sea lines of communication, especially, in the wake of current activities in the Gulf of Guinea, such as piracy, disruptions and destruction of oil/gas operations and installations, bunkering, drug trafficking and smuggling, among other activities.

He said the Ghana Air Force would not be left out of the programme of resource enhancement, “so that we have an Air Force worthy of the name.” 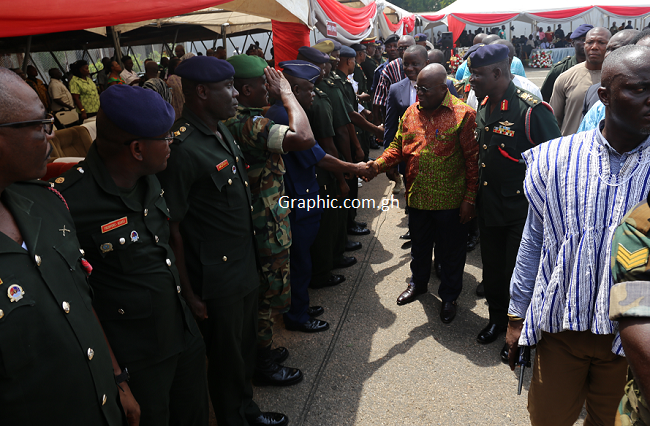 To further boost the morale of the GAF, the government, in its 2017 budget, announced the “barracks regeneration project,” to refurbish and renovate all military barracks across the country.

To further boost the morale of the GAF, the government, in its 2017 budget, announced the “barracks regeneration project,” to refurbish and renovate all military barracks across the country.

“A contented soldier is one whose remuneration does not unduly distract him from his mandate. My government intends to take your welfare seriously,” President Akufo-Addo said.

The President said action on the third phase of the 37 Military Hospital had begun to ensure that the hospital continued to provide first-class health care for members of the GAF and their families, and also for the hospital to function effectively as a national emergency hospital.

“The government is also committed to constructing a new military hospital in Tamale to serve the health needs of military personnel and their families in the northern sector of our country,” he said.

The allowances of Ghanaian peacekeepers have been increased from US$31 to US$35, effective January 2017, President Nana Addo Dankwa Akufo-Addo has said.