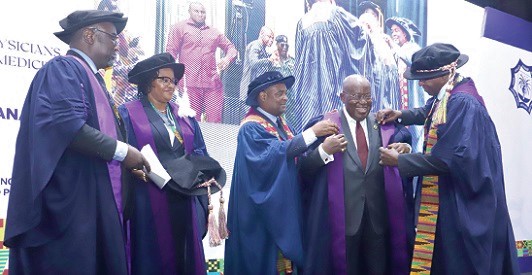 President Nana Addo Dankwa Akufo-Addo has urged the West African College of Physicians (WACP) to expand its postgraduate programme to help curb the exodus of doctors from the country.

He said the frustration young doctors went through in their quest to specialise in countries in the sub-region had resulted in many of them being enticed by foreign countries.

Addressing the 46th annual general and scientific meeting of the college in Accra yesterday, the President expressed concern over the renewed exodus of doctors and other healthcare providers to more endowed nations.

“The worrying trend is not limited to only Ghana but the entire region,” he added.

The three-day conference, being attended by fellows and members of the college from across the West African sub-region and members of the Diplomatic Corps, is on the theme: “Health and well-being amidst a prolonged pandemic: Implications for physicians and patients”.

President Akufo-Addo also called for a decentralised system in the training of medical doctors.


He said the current centralised manner in the training was leading to the lack of trained doctors and specialists in districts and regions, thereby worsening the already huge disparity in the numbers of rural and urban doctors.

He further said even though the government had made funding available for postgraduate medical training, the current system required doctors to move from the districts and the regions to the few teaching hospitals to do so.

He said the success of decentralisation in the sector could only be realised if the training institution offered accreditation to more facilities outside the conventional teaching hospitals for such training programmes.

“It is my plea that as you deliberate on these challenges, you will fashion out ways to decentralise the training of medical doctors, not only at the undergraduate level but also the postgraduate,” the President said.

He commended the medical fraternity for the immense support it offered in various countries in the sub-region during the pre- and post-COVID-19 pandemic.

He also acknowledged the significant contribution of the college in the training of medical doctors, saying: “As the foremost postgraduate training body established in 1976, the various faculties have, in a concerted manner, trained doctors in the fields of community health, family medicine, laboratory medicine, internal medicine, pediatrics and psychiatry.”

“The world is still striving to unravel the true effects of the COVID-19 pandemic. No one needs to be told about what it has done to the global economy, as every country on earth is reeling from its ravages.

“The search is still ongoing to find answers to the long-term effects of the virus on the human body,” the President added.

He reiterated the commitment of the government to see to the successful implementation of the pan-African initiative for domestic vaccine manufacturing, adding that a vaccine manufacturing committee he set up had come up with a road map for its establishment in the country.

“We are working closely with the private sector and fellow African partners to become a vaccine manufacturing hub in Africa for Africans. Our goal is to produce vaccines domestically by the first quarter of 2024,” he said.

Touching on the Agenda 111 initiative, he said it was to make the country the centre of medical excellence and a preferred destination of medical tourism in West Africa.

The Minister of Health, Kwaku Agyeman-Manu, lauded the dedication and commitment of health professionals, especially in dealing with the COVID-19 pandemic, and assured them of his outfit’s continued support.

He said the devastating effects of the pandemic had led to the country increasing its PCR testing laboratories from two to about 60, adding: “We have built adequate capacity to be able to store millions of ultra-low temperature vaccines in the country.”

The outgoing President of the College, Dr Durodami Lisk, said the college would continue to strive for excellence, self-proficiency and value addition to its products and also ensure its economic independence.