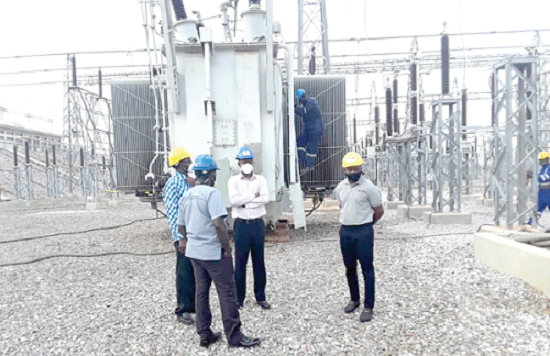 The Ghana Grid Company Ltd (GRIDCo), the main transporter of the country’s bulk electrical power, is installing a new 66 Megavolt Amperes (MVA) transformer at its Anwomanso substation to improve electricity supply in the Greater Kumasi area.

The installation activity is expected to be completed by the middle of this month and would solve the current erratic power supply being experienced by residents of Kumasi.

Residents of Kumasi and its environs have been experiencing power outages for some time now due to the unreliable power supply.

The Director of Northern Network Services of the GRIDCO, Mr Vincent Boakye, who conducted journalists on a tour of the project site, said the challenge inherent in the supply of power was due to the distance from the generation point to the load centre.

He said Kumasi was the farthest load centre from the generation point, which was why it had been experiencing some challenges in the supply of power.

Aside from that, he said the demand for power in Kumasi had increased, thus leading to a doubling of the power load within the last 10 years.

As part of the measures to improve power supply to residents in the city, Mr Baokye said the company was constructing transmission lines that were of bigger capacity.

He said one of the lines was laid from Aboadze to Anwomanso but, “because the biggest load point in Kumasi is at Ahodwo, power would have to be taken from Anwomanso to Ahodwo.”

He said the Ahodwo substation also supplied power to the northern part of the country, that is, Kintampo and beyond.

“We are having congestion on the line that transports power from Anwomanso to Ahodwo and beyond, and it is because we have not finished the 330 line that is supposed to link Kumasi to Kintampo,” he said.

He further said when that line was completed, the line from Ahodwo to Kintampo would be linked directly to Anwomanso.

“The transformer would, therefore, increase the power in the Greater Kumasi area and also reduce the amount taken from Anwomanso,” he added.

The Ashanti Regional Manager in charge of Major Projects for the ECG, Mr Frederick Kwabena Bediako, said the ECG was ready to take on additional supply to improve power supply in the region.

Already, he said, trenches had been dug in readiness for the laying of the lines.

He was hopeful that power supply to residents in the region would be improved.