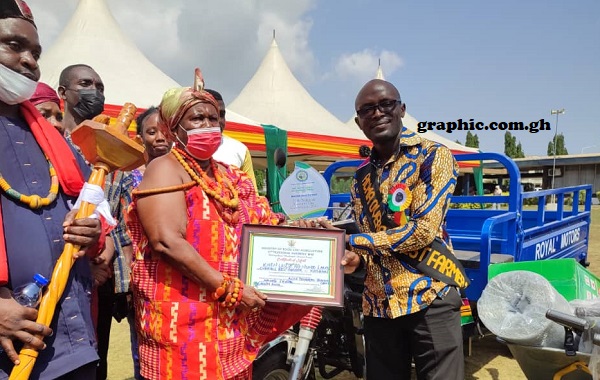 Mr Larkai who has been farming for two years was presented with a tricycle, wheelbarrow, knapsack sprayer, wellington boots, spade/shovel, cutlass, agro-chemicals, disinfectants, feed, transport crates and a water tank for his efforts over the past year.

In an interview with the Daily Graphic after receiving a plaque and a symbolic cutlass, Mr Larkai urged the youth to "put their energies into agribusiness because it pays".

He added that for the next farming year, he was looking to expand his farm so he could make more profit and win a national best farmer award.

The first runner-up position in the municipality went to crop farmer Mr Ahmed Ibrahim, who also received farming implements and a plaque as his award.

A total of 9 farmers and an agricultural extension officer from the Ayawaso Central Municipality were awarded at the ceremony held at the Accra Technical Training Centre to reward.

In an address at the ceremony, the Ayawaso Central Director of Food and Agriculture, Madam Martina Mensah said although the municipality was not a typical farming Community, it could boast of not less than 1,074 Cattle, 1,400 Goats, 20,000 Birds, 1,052 Sheep and many other varieties of crops and animals.

She said her Department had within the past year trained over 120 farmers in Integrated Pest Management, Climate Smart Agriculture, Housing of Animals, Feed supplement and Formulation, Litter management, and Biosecurity in Poultry Production.

"Mr. Chairman, it is extremely gratifying that we as Ghanaians have deemed it worthy to honour our men and women who through discipline and hard work have excelled in their various fields of endeavour. We want you farmers herein gathered to know that we appreciate your endeavours, perseverance and stubborn will to succeed".

The Municipal Chief Executive (MCE) of Ayawaso Central, Alhaji Mohammed Quaye said the theme for this year's celebration, "Planting for Food and Jobs; Consolidating Food Systems in Ghana" was appropriate because it reflected the need for Ghana's agricultural production to correspond or even outstrip its ever-growing population.

"We need to encourage our private investors who import these foods to channel their resources into the Agricultural Sector to promote the production of our local food".

He said as part of efforts to take advantage of opportunities in the agricultural sector, "the government since its inception had introduced and continue to give improved seeds and subsidized fertilizer to farmers to enable them to increase their production".

"Other interventions by the Assembly and the Municipal Agricultural Directorate include supply of coconut seedlings to schools, households and institutions, vaccination of cats and dogs against rabies, as well as training of farmers in integrated pest management, feed formulation, and post-harvest technologies among others".