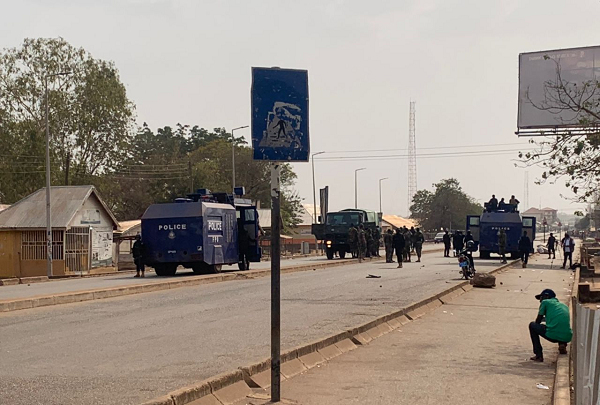 The police officer involved in the shooting incident at Lamashegu, which resulted in the death of one person, has been remanded into police custody.

General Corporal Samson Kweku Darfour who allegedly shot into the unregistered Toyota Camry that triggered the clash in Lamashegu has been charged with unlawful discharge of weapon and causing harm.

He is to reappear in court on February 24.

Corporal Monney Koranteng who allegedly made derogatory comments on social media against the Lamashegu Chief and the people was charged for offensive conduct conducive to the breach of peace.

He was however granted bail to the tune of GH¢5,000 with two sureties by the Tamale Circuit Court.

He is also expected to reappear before the court on February 28.

The police administration last Monday interdicted six officers involved in the shooting incident at Lamashegu, a suburb of Tamale in the Northern Region that resulted in the death of one person and injury of several others.

The shooting incident occurred on Sunday, February 13, at about 1pm, and led to the subsequent attack on the Police by the youth of Lamashegu.

One person died while several others sustained various degrees of injury after some police personnel in Tamale clashed with the youth of Lamashegu.

The incident is said to have occurred after the police on their patrols allegedly stopped an unregistered vehicle but the driver refused to stop resulting in the former chasing the latter.

The driver drove to the Lamashegu chief’s palace for refuge, but was given a hot chase and shot at.

Infuriated by the incident, the youth of the community reportedly peddled stones at the police and burnt lorry tires on the streets.