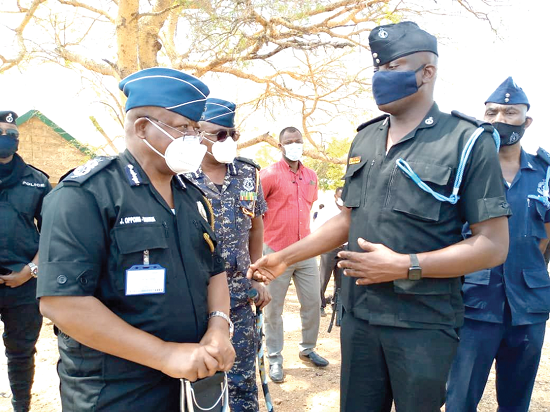 The Tema Regional Police Commander, Deputy Commissioner of Police (DCOP) Barima Tweneboah Sasraku II, accompanied by some police officers has visited the family of Deputy Superintendent of Police (DSP)  Divine Asian, the senior police officer who allegedly shot himself at his residence at Borteyman near Adjei Kojo in the Greater Accra Region.

DCOP Sasraku, who spoke on behalf of the IGP, urged the family to remain calm as the police conducted investigation into the matter.

Police investigators found a suicide note, a pistol, a spent shell and four live rounds of ammunition in the room.

DSP Asiam, with the Legal and Prosecution Unit of the Ghana Police Service, was stationed at the Ashaiman Division.

He left behind three children, two boys and a girl, the oldest being 14 years and the youngest, a two-year old girl.

His wife died two years ago during the birth of the youngest child.

He lived in his residence at Borteyman with his children, sister and a house help.

The Tema Regional Police commander expressed deepest condolences on behalf of the police administration to the bereaved family and assured them of every support until investigations were completed.

Barima Sasraku reiterated his appeal to the public to be sensitive and circumspect in their commentary on the matter.

“Death is inevitable but the way everybody will go depends on his or her Maker so we should not read any meaning or do anything to disrespect the dead, as well as the organisation,” he said.

An uncle of the deceased, Mr Samuel Asiam, who welcomed the delegation, described the late DSP Asiam as a very religious person who came from a strong Christian family.

He said he was intelligent, God-fearing and a reserved person, adding that the news of his death came as a shock to family members.

“We cannot fathom out what happened, we cannot understand it…whether it is an evil force from somewhere, we cannot really understand until such time that investigations were completed,”Mr Asiam said.