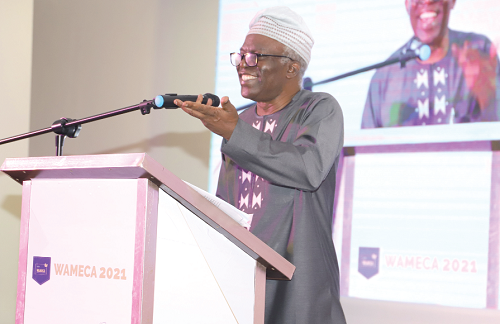 Mr Femi Falana, a legal practitioner, speaking at the conference organised by the Media Foundation for West Africa in Accra. Picture: GABRIEL AHIABOR

The Minister of Information, Mr Kojo Oppong Nkrumah, has reminded journalists to always fact-check their stories before publication.

He said by doing that, they would be paying attention to the fundamentals of journalism and put a stop to the growing spate of misinformation, particularly in the digital media.

The minister added that in many instances, fake news on social media was also published in mainstream media without due diligence, a development he described as worrying.

Mr Oppong Nkrumah, who was delivering a video message at the 2021 West Africa Media Excellence Conference and Awards (WAMECA) in Accra yesterday, cautioned that the continuous publication of fake news in mainstream media could erode public trust, thereby weakening the integrity of the media.

The event, which was organised by the Media Foundation for West Africa (MFWA) was on the theme: Information, digital media regulation and journalism in Africa.”

The conference was attended by participants from across the continent. They included media practitioners, academia and civil society organisations.

They deliberated on challenges and changing trends in free expression, media development and access to information and ways to tackle them.

The awards also seeks to reward and inspire journalism excellence in West Africa, as well as honour journalists who stood out in the coverage of stories.

“We should go back to the rudiments of journalism and not allow competition and the desire to break the news first to rule us all the time,” the minister further advised.

He said the government had rolled out some interventions, including a media capacity enhancement programme, to build the capacity of journalists.

He also charged editors to be alert and critical and ensure that unverified information was not published, and in an event where some wrongdoing was detected, the media organisation should retract and apologise in accordance with the ethics of the profession.

For his part, the Executive Director of the MFWA, Mr Sulemana Braimah, called for broader conversation on how to deal with the issue of misinformation and also manage content without compromising freedom of expression.

He, however, expressed concern that efforts by some governments to pass legislation to check fake online news had rather been used to target and harass journalists.