One of the teams that participated in the soccer tournament
30.5k Shares

The Executive Director of RISE-Ghana, Alhaji Awal Ahmed Kariama, has called on the public to take positive actions to end sexual and gender-based violence (SGBV) in their respective communities.

He said despite years of sustained advocacy and investment by various stakeholders, progress on ending the increasing and varied forms of SGBV has not been encouraging.

According to him, whereas many survivors of SGBV are labeled and shamed, perpetrators of such crimes are left off the hook, creating a culture of impunity and normalisation of violence again women and girls.

Alhaji Kariama made the call when RISE-Ghana organised a female soccer tournament to end this year’s 16 Days of Activism against Gender-Based Violence, an international campaign against SGBV at Bolgatanga, the Upper East Regional capital today, December 5, 2021.

The 16 Days of Activism against Gender-Based Violence is an international campaign to challenge violence against women and girls.

The campaign runs every year from November 25, the International Day for the Elimination of Violence against Women, to December 10, Human Rights Day.

Alhaji Kariama noted, for instance that, “Our research in the Upper East Region revealed that, 65 cases of defilement were recorded in 2020 alone, up from 33 in 2019.”

He added, “An estimated 10,000-15,000 girls have dropped out of school due to negative gender norms such as male-preference and the non-provision of household maintenance which has been exacerbated by the COVID-19 pandemic and associated curtailment measures such as lockdown and closure of schools.” 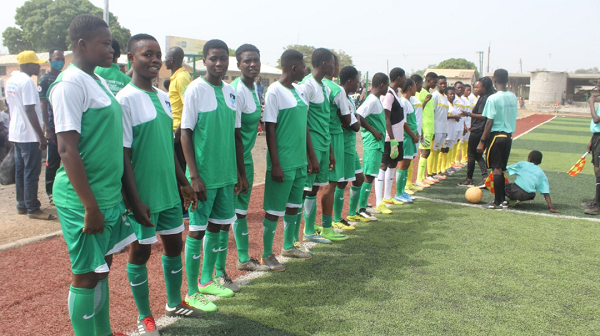 For him, all must put their hands on deck to help end SGBV in our communities, saying “In a nut shell, we call on all power holders, duty bearers, government, traditional leaders, men and boys to take positive action and support efforts to prevent SGBV, help survivors seek redress, call-out and name and shame perpetrators and stop adjudicating criminal cases.”

Touching on the rationale for organizing the tournament, Alhaji Kariama said “Football, particularly female soccer has the potential to offer safe spaces for women and girls during the pandemic, help them cope, challenge negative norms, seek redress and stay away from abusive relationship.”

He said the tournament also fits perfectly with the calls by the UN Secretary General, António Guterres for a global campaign and advocacy to create understanding and increase awareness to end Violence against Women by 2030.

He said the event was organised under the auspices of their “ENOUGH!” project, which seeks to challenge long-held negative gender norms that perpetuate and normalise all forms of violence against women and girls by empowering women, girls, boys, and men in Mali, Ghana, and Liberia to take positive action to end sexual and gender-based violence in their respective countries.