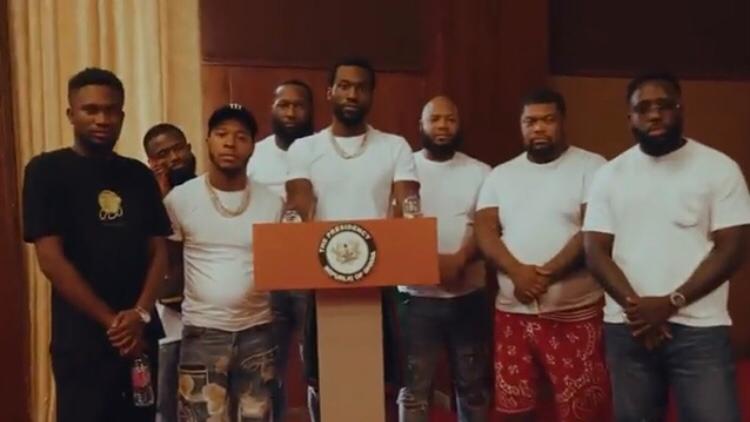 The Deputy Minister of Information, Fatimatu Abubakar says American rapper Meek Mill did not use the presidential lectern for his now-deleted music video that generated controversy last Monday.

According to Ms Abubakar, the lectern which was used in Meek's video is used by visitors when they address the President.

According to her, in the past, there have been countless instances where visitors to the Jubilee House have recorded videos at the forecourt, banquet hall or the ground floor/waiting area at the seat of government.

She said the difference in the reaction to Meek's video was because of the way his music video was put together.

Ms Abubakar said the protocol system at the Jubilee House and the Diaspora Directorate had learnt lessons from the incident but urged Ghanaians not to downplay the competence of those officers.

"First of all, that was not the President’s lectern," Ms Abubakar said in a radio interview on Accra based Asempa FM.

Instead, she said there was another lectern at the banquet hall of the Jubilee House that visitors used when addressing the President.

The rapper has apologised for filming the music video in Ghana's presidential palace, also known as Jubilee House.

The star caused an uproar with the video, which saw him lip-syncing in the corridors and halls of the Jubilee House.

He was accused of "desecrating" Jubilee House, while some members of Parliament raised questions about the potential security risks.

In a statement, Meek Mill said he takes responsibility for the mistake.

"The fastest way to make connection is thru music [sic] and I wanted to do that with displaying art. I'm in my 30s from America and didn't know much about the lifestyle."

Mill, who was born Robert Rihmeek Williams in South Philadelphia, travelled to Ghana last month, after learning in an ancestry test that he was 18% Ghanaian.

He performed at the Afro Nation concert in Accra, rode dirt bikes in the streets, and was later invited to see Jubilee House.

The footage he filmed during his visit was uploaded on Instagram on Sunday, provoking outrage in Ghana.

Some members of the opposition have called for the persons who allowed the filming to be sacked.

"All those responsible for this despicable desecration of the Jubilee House by Meek Mill must be fired immediately," Samuel Okudzeto Ablakwa, Member of Parliament for North Tongu wrote on Facebook.

"How do those explicit lyrics from the president's lectern project Ghana positively? Is Ghana's seat of government no longer a high security installation?"

Mr Okudzeto said he would call for an inquiry into the incident when Parliament returns from recess.

"We will insist that all those who masterminded this national disgrace and international embarrassment are brought to book," he told Accra-based Joy FM.

A former deputy Chief of Staff, Alex Segbefia agreed that the video was "unnecessary and is unacceptable in any shape or form".

Social activist Julius Kwame Anthony added that "seeing a foreign musician on the pulpit of the president" was a "shocking" incident that "is sinking our country to a new depth".

"I do not think under any circumstance would it be allowed for a Ghanaian musician [like] Shatta Wale or Stonebwoy to be on the pulpit of the President of the United States. It would not happen".

In his statement, Mill explained that he had simply been excited to share his experiences in Ghana with the world.