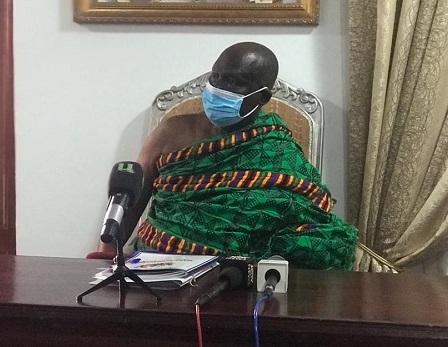 The Omanhene of Manso Nkwanta in the Amansie West District of the Ashanti region, Nana Bi Kusi Appiah II

The Omanhene of Manso Nkwanta in the Amansie West District of the Ashanti region, Nana Bi Kusi Appiah II, has backed the decision of mining firm, Asanko, not to allow politicians including the District Assemblies from becoming signatories to a Social Responsibility Fund (SRF) meant to undertake developmental projects in its catchment area.

The fund, over the years, has not been utilised because the assembly members in the area have been contesting their exclusion from the management of the fund.

Currently, the fund is being managed by the Board of Trustees for the fund, Asanko Mines and the Manso Nkwanta Traditional Council who are the representative of the people.

But the aggrieved assembly members in recent times, have been mobilising some youth groups to invade the concession of Asanko to vent their spleen for the delay in utilising the fund.

Just last week, some youth groups were driven out of the concession by security personnel for demonstrating.

Sequel to that, the Omanhene of Manso Nkwanta told a press conference at Manso on Monday that "the politicians especially the district assemblies were excluded to prevent interferences."

Beyond that, he said the members have a limited tenure of office, which means the agreement may have to be changed after each assembly member exited.

In apparent defence of the mining firm, Nana Bi Kusi Appiah said: "My policy is that I do not want any interference from any of the politicians. The constitution of the board was agreed by all as well as the representative of the people so why go to the assemblies to look for other trustees,” he said.

"All I want is peace so we can start benefiting from the fund as a people. There are a lot of developmental projects lined up for the 23 communities but everything has stalled because of the assemblies insistence to be added to the signatories," he said.

The chief, on whose land the mine is situated said: "All I want is to champion the welfare of my people and not my personal interest," he said.

The Chairman of the Board of Trustees of Asanko mine, Mr George Osei Mensah, announced that five projects would be rolled out at Kwabenaso, Manso Abore, Manso Nkran, Asuadei and Kompesi, barring any further hitch.

He said in the coming days, local contractors would be short-listed for the projects to commence since the money was "lying fallow."

The Sustainability Manager of Asanko Mines, Mr. Rammy Oboro was emphatic that the District Assemblies do not have any role to play in the agreement made between the mines and Manso Nkwanta Traditional Council, representatives of the local people.