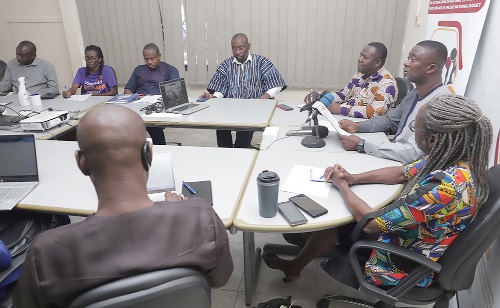 The Ghana HIV and AIDS Network (GHANET) has called on the government to make the National HIV and AIDS Fund (NHAF) operational to attract donor support.

It said failure to do that would put the lives of the over 250,000 adults and the over 12,000 children surviving on Anti-Retroviral (ART) medications in grave danger, especially in the wake of strong signals that the Global Fund, which had been the single largest donor to the country’s HIV/AIDS response since 2002, was cutting back on its support to the country, particularly in the supply of free ART medications and other essential commodities required in the fight against HIV/AIDS.

“Since this information came to our knowledge, we have become grimly apprehensive not knowing what will befall our brothers and sisters and children living with HIV should the Global Fund go ahead with their plans,” the President of GHANET, Ernest Amoabeng Ortsin, said.

Mr Ortsin, who was with members of the Network of Persons Living with HIV (NAP+) and Civil Society Networks represented at the Ghana Country Coordinating Mechanism of the Global Fund, made the appeal at a press conference in Accra.

Giving a background to the establishment of the NHAF, Mr Ortsin said in 2016, the government, in responding to the dwindling inflow of donor funds, took a decision to establish the NHAF and the intention was to domestically generate resources to undergird the national response.

The fund was supposed to be operational in 2017. However six years on, it has not because the Minister of Finance, who is required by the Act establishing the fund, Ghana AIDS Commission Act, 2016 (Act 938), and the Legislative Instrument (LI 2403) that regulates the operations of the fund to include it in the Appropriation Bill to Parliament, has not been able to do so.

“So in the absence of that action by the Finance minister, the fund has become dormant. In fact, it has suffered a stillbirth in the sense that it has not seen the light of the day at all,” Mr Ortsin said.

He said due to the lack of resources, for more than a decade, all HIV/AIDS education and sensitisation that were in the past seen in schools, workplaces, churches, mosques, markets, lorry stations, local communities and the media have ceased.

As a result of that, he said there were now cohorts of young people who knew practically nothing about HIV/AIDS and it was, therefore, no surprise that adolescent girls and young women accounted for 20 per cent of the total new infections in the year 2021.

Mr Ortsin made strong appeals to the President, Nana Addo Dankwa Akufo-Addo; the First Lady, Rebecca Akufo-Addo; the Minister of Finance, Ken Ofori-Atta; development partners such as the Global Fund, UNAIDS, WHO, PEPFAR and the general public to do all within their power to ensure the activation of the NHAF.

To President Akufo-Addo, he urged him to honour his 2021 pledge to the United Nations High-Level Meeting on HIV/AIDS to commit $100 million to the NHAF over a five-year period, and to Mrs Akufo-Addo, he appealed to her as the mother of the nation to add her voice to the call for the activation of the fund.