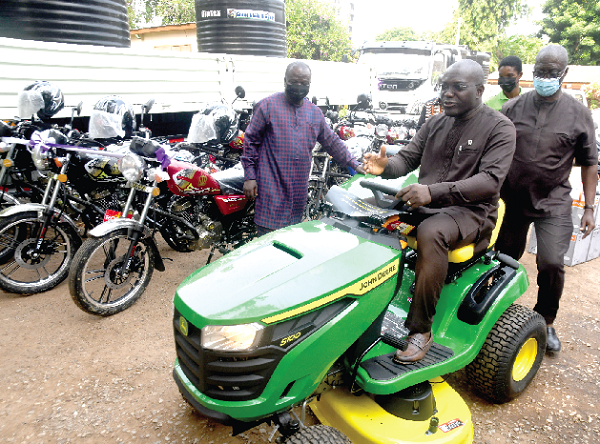 The Ministry of Local Government, Decentralisation and Rural Development (MLGDRD) has begun the process of revamping the Department of Parks and Gardens to enable it to carry out its programmes effectively.

In line with that, the ministry yesterday presented some vehicles and equipment to the department to augment its existing fleet.

They include a tipper truck to replace a 30-year-old one, a Toyota Land Cruiser Prado, a 4×4 Nissan pick-up, three desktop computers and two laptops.

In a speech read on his behalf by his deputy, Mr Martin Adjei-Mensah Korsah, the sector Minister, Mr Dan Botwe, expressed concern over the encroachment of the department’s lands.

Parcels of land belonging to the department which have no ownership titles are being encroached upon in Accra, Takoradi, Wa and Tamale.

Mr Botwe said the ministry set up a task force to conduct an assessment of all properties of the department to ensure they were protected.

It would also engage landowners and the Lands Commission to facilitate the proper acquisition of lands for the operation of the department, he added.

The minister assured the management and staff of the department that all their grievances were being looked into to ensure they were amicably resolved to enhance productivity.

He commended the department for exceeding its revenue targets since 2019, saying last year there was a significant increase of 26 per cent in its internally generated funds (IGFs) over the actual target.

Mr Botwe said the department also carried out horticultural sensitisation programmes to educate the public on the environment, while its School of Horticulture trained students and plant lovers in horticulture.

The acting Director of the department, Rev. Charles Ayitey Okine, expressed appreciation to the government for its intervention, saying the vehicles and the equipment would help the department in the effective delivery of services.

The department, which was established by the Local Government Act (54) and the Civil Service Act 1993 (Section 12) of PNDC Law 327, is mandated to ensure the development of the horticultural potential of the country, in line with operationalising the broad environmental policy directives as enshrined in the 1992 Constitution.

As mandated by law, it is to develop and promote effective landscape beautification, cultivate and conduct research into horticultural products, manage floricultural sections and provide routine landscape maintenance of prestige areas.

As a government institution, the department is also mandated to provide capacity building in horticultural studies and is also responsible for the management of the Aburi Botanical Gardens, which is one of the tourist attractions in the country.

However, over the years, it has not been able to deliver on its responsibilities due to a number of challenges not limited to logistics but encroachment of its lands as well.