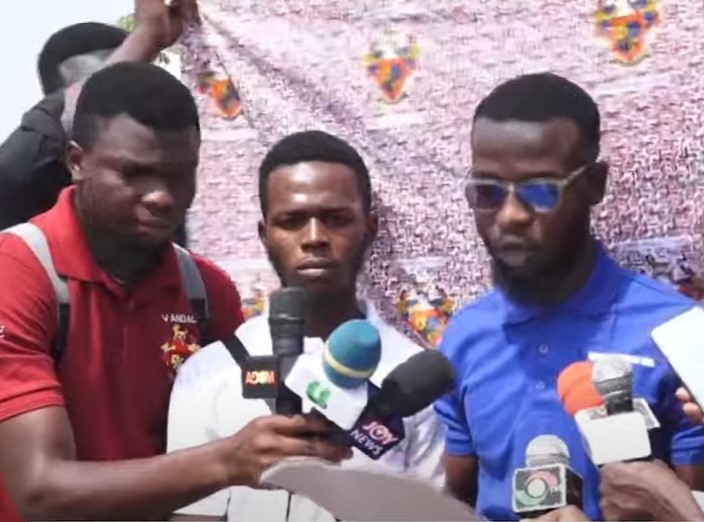 Some students of the University of Ghana (UG) have expressed concern about a recent management decision to revoke the residential status of some continuing students at their affiliate halls of residence.

In a press statement, the students described the management decision as “heartless” for deciding to revoke the residential status of continuing students of Mensah Sarbah and Commonwealth halls.

According to the decision of management, all continuing students of the Commonwealth Hall, an all-male hall of residence, and continuing male students of Mensah Sarbah Hall will not return to their halls nor to any of the traditional halls.

“They are to be randomly assigned to available rooms in any of the UGEL and private hostels,” a communique dated December 14, 2022, according to the students said.

This, according to the students, was a management decision to start an In-out-out-out policy as part of measures to handle accommodation problems on campus.

However, to the students, they see it as a ploy by management to break the activism front of students by removing all continuing students from Commonwealth and Mensah Sarbah halls and disintegrating their affiliation to the traditional halls.

"Why does University Management want to rid young level 100 of mentorship, senior course mates advice and the benefits that they enjoyed by having continuing students direct them when they were in the University?

"How does University Management expect Vikings and Vandals to competitively match other halls in terms of sports, SRC activities and even leadership of JCRs when all students in these halls will be level 100s?

"We would want to send a firm notice to University Management, that we will fight for our rights with all tools at our disposal, we would not stand and watch our future and that of other future generations jeopardized because you as management failed!

"We would have a legal battle, and we know they have capriciously crippled the JCR system in both halls making it quite impossible to have leadership to lead the charge. We tell them today that we have seen it but impossible is nothing", the students stated.

Below is a copy of the press statement from the students

All media gathered here, there is without a doubt that tertiary education in Ghana has evolved, from the days where our grand-parents enjoyed one-in-a-room, till our parents enjoyed free feeding until the Famous Akosombo Accord, of which University of Ghana has always been at the centre of it. Likewise students’ activism, which was birthed, shaped and defined by students of the University of Ghana.

Mensah Sarbah Hall and Commonwealth Hall have always been pivotal since time immemorial when it comes to advocating for the welfare of students. The two halls have on countless occasions stood by students, fought good causes to the benefits of students and resisted obnoxious policies from both government and management against students — we are not stopping this anytime soon we assure you.

On 13th December, 2022 the university management issued a communique announcing that all continuing male residents in Mensah Sarbah and Commonwealth Hall will lose their rooms. This arrangement is a precursor to welcome an In-out-out-out policy, which will be implemented upon successful execution of this decision. Today, we tell them, as students we always can not be at the receiving end of management’s incompetence.

Somewhere in 2020, after about 10years of operating the Diaspora Halls now UGEL hostels, we as students did our part by paying the high hostel fees slapped on us, the University Management failed on their part to service the loan contracted to build this hall project which has resulted in the privatization of these halls and also a take over of some annexes of other halls to be used as collateral.

Once again, as students, we find ourselves victims of incompetence and mismanagement, as we are made to take a bitter pill of absorbing the monetary cost of the actions and inactions of management of this university. Today, we are compelled to cough up more than 3,800 cedis being an increment in UGEL residential fees to the already expensive residential fees of 2,980 cedis per year, within a space of two years!

The other traditional hall annexes which have now been privatized, again due to incompetence of University Management, also slaps different hostel fees on students higher than the students in different annexes of the same hall.

For the avoidance of doubt, the last time such a residence arrangement was implemented in the school, was an in-out-out-in system to tackle accommodation deficit. However, after an assessment and report by external contractors, the findings revealed that the rooms should be decongested for good ventilation and what is still now the ‘inner rooms’ be made an open place as the conversion has a long term effect on the building. These and many others were the recommendations.

The University under Professor Ernest Aryeetey as Vice Chancellor undertook decongestion, abolished the then existing In-out-out-In policy, getting us students a place to be on campus to pursue our academic journey. This meant that parents and students would not worry about how to get accommodation as University of Ghana is sited around an area where cost of living and accommodation is relatively very high.

Fast forward to 2022, the University Management has sat idle and looked on for over a decade for us to go back into accommodation crisis and their solution is an In-out-out-out policy? We say to them today, the same way they sat and planned to roll out this obnoxious policy which will take full effect by 2025, they should have that same plan for building more hostels to accommodate the ever increasing students admissions by 2025. We and other future students will not be victims of their ineffectiveness and gross incompetence.

The University Management which fails to provide proper security for students, failed to have conclusive investigations but has been quick to issue a ‘wholesale’ sanction that affects all male continuing students in Mensah Sarbah Hall and Commonwealth Hall.

The said riot which by the reports of management lasted for almost ‘4 hours’, throughout this period of time, the university security were around and a police patrol car was parked near the university guest house, interestingly we have confirmed that some top level university management members were also near the guest house and guess what they did nothing!

All these individuals and agencies who could have dispersed and brought calm to this riot did not act.

They were very close by, an estimated 100 meters away and watched on.

This has made us believe that the University Management had a grand scheme, they were overwhelmed by their incompetence and wanted an easy way out, so why not watch on then use this opportunity to cripple the students front and at the same time find a ‘perceived’ solution to the accommodation problem.

The PRO VC (ASA), said on Radio Univers that, investigations into the riots has not been concluded yet the university has unreservedly sanctioned innocent continuing male students. Natural Justice has been sacrificed on the altar of convenience!!

When he was asked that, why should the actions of a few affect the majority he further went on to say “In every security situation, people who are not involved will get affected, it happens everywhere. When there is war, innocent people get killed it is a reality of life”.

Is this the kind of leadership fit to oversee the welfare and affairs of students?

The University Management maliciously brought out this information a week to the beginning of Christmas and expect parents and students to find money to pay for an accommodation at a place which now costs over GH¢3,800 as compared to the about GH¢1,000 they would have paid in their original halls. Why burden parents and innocent students this way?

What punishment are they giving to themselves? Are they owning up to the part they played in this?

We want to ask this curious question, that after the investigations has been completed and the guilty ones found what would be the justification for punishing all of us? What will be the justification for saying because I’m a continuing male student I lost my bed and was forced to pay or defer, that this decision has forever altered my academic life because I can’t afford?

The University Management, should conclude the investigations and punish culprits as the innocent are spared, if trokosi system has been banned then this wholesome punishment for something many are oblivious of must be banned. This decision by university management is synonymous to the ideology behind the archaic trokosi system.

Long lasting solutions include a round table discussion by the main actors in these halls and with no ostrich behavior about the existence of main actors like the Traditional Council and the alumni in these halls.

This current decision by management we know is malicious and not only limited to;

Ghana Tertiary Education Commission issued a directive that all public universities should effect a 15% only increment across board for fees charged in the 2021/2022 academic year. But the University of Ghana clearly have not heeded to this directive despite the commission issuing another release stating that all institutions that do not follow this directive will be sanctioned.

Nonetheless, we say to the University of Ghana Management today that, we will remain resolute and will not kowtow to such knee-jerk reactionary approach!!

Why does University Management want to rid young level 100 of mentorship, senior course mates advice and the benefits that they enjoyed by having continuing students direct them when they were in the University?

How does University Management expect Vikings and Vandals to competitively match other halls in terms of sports, SRC activities and even leadership of JCRs when all students in these halls will be level 100s?

We would want to send a firm notice to University Management, that we will fight for our rights with all tools at our disposal, we would not stand and watch our future and that of other future generations jeopardized because you as management failed!

We would have a legal battle, and we know they have capriciously crippled the JCR system in both halls making it quite impossible to have leadership to lead the charge. We tell them today that we have seen it but impossible is nothing!

We shall push through and find leaders amongst us, for from the ashes the phoenix rises.

To our fellow Vikings and Vandals, just like our national anthem says ‘ … and help us to resist the oppressors rule’

“First they came for the socialists, and I did not speak out— Because I was not a socialist.

Then they came for the Jews, and I did not speak out— Because I was not a Jew.

Then they came for me—and there was no one left to speak for me.”