Leadership must stand up against ‘galamsey’ - Rev. Liwangol

BY: Timothy Ngnenbe
Category: General News
Rev Maxwell K.K. Liwangol, General Overseer of the Evangelical Church of Ghana, addressing the graduation ceremony of the College of Theology and Missions held in Accra on Saturday
30.5k Shares

People in leadership positions must demonstrate loyalty to the country by using their influence and platforms to stand up against illegal mining (galamsey).

The General Overseer of the Evangelical Church of Ghana, Rev. Maxwell K.K Liwangol, who made the call, said a major step towards combating ‘galamsey’ was for leaders to demonstrate commitment to the fight.

He made the call at the graduation ceremony of the College of Theology and Missions (CTM) in Accra last Saturday, at which 30 students who pursued diploma and degree courses at the college were presented with certificates.

“If we really love Ghana, let us stop them from polluting our water bodies, and if they remain recalcitrant, the law should deal with them,” he stressed.

Rev. Liwangol said until the “hide-and-seek” games being played in the fight against the menace were stopped, there would be no positive results to show for the resources that had been pumped into tackling the canker. 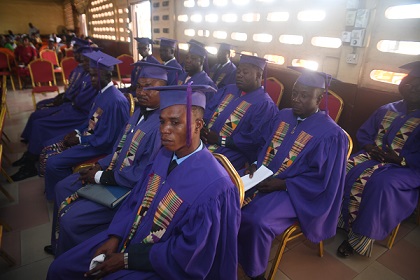 “The destruction of the environment through illegal mining activities has reached alarming heights and requires collective efforts by all patriotic citizens to expose the perpetrators in defence of the country,” he said.

Later speaking to the Daily Graphic, Rev. Liwangol said it was unacceptable for political, religious and traditional leaders to look on while “enemies of the state” destroyed the country’s natural resources.

He noted that if care was not taken, the negative impact of galamsey would plunge the country into serious economic crisis and security threat.

“A few years ago, Ghanaians drank water from the Birim, Offin, Pra, Ankobra and Densu rivers. Those rivers gave us fish. Today, the story is different, but if you travel around and see the nature of water in these rivers, you will ask yourself if human beings should be drinking this kind of water,” he said.

Particularly, he stressed the need for pastors and leaders of faith-based organisations to use their platforms to educate members of the public on the consequences of ‘galamsey’ to engender a change in attitude.

“Most of these illegal miners are our members; they sit in our churches. We need to make them understand that the spirit lives in a healthy body, so for you to go to church and claim you are obeying the Gospel while you keep polluting the rivers means you are not obeying the God you claim to be serving,” he said.

He observed that President Nana Addo Dankwa Akufo-Addo’s call on Ghanaians to be citizens and not spectators meant that all must get involved in national development issues, including the fight against galamsey.

“If we begin to import water into this country, all because we failed to stop galamsey, you can imagine what the impact will be on the economy. Let us fight it before it kills us,” he said.

On the economy, the clergyman said the current economic challenges were an opportunity for Ghanaians “to rally round the national flag to come out of the woods”.

“It is true that the exchange rate is so high, inflation has crossed 30 per cent, fuel prices and the cost of living keep increasing, but that does not mean we should throw up our hands in despair,” he said.

Rev. Liwangol called on all stakeholders to put their political, religious, ethnic and other differences aside and work together to make the country a better place.

He said the current challenges should be a wake-up call to those managing public resources to prioritise their expenditure on necessities and avoid wasteful spending.

“While the government is working towards getting a programme with the International Monetary Fund, concerted efforts must be made to deal with corruption in the system, so that national resources will be utilised in a manner that benefits Ghanaians,” he added.

In a sermon delivered at the graduation ceremony, the West Africa Director of the Association of Africa Bible Schools (AABS), Rev. James Attah Odoom, urged the graduands to use the knowledge they had acquired to preach the undiluted Word of God, focusing on making the world a better place.

He underscored the need for Christian leaders to serve well, instead of lording it over the people.

Rev. Odoom cautioned pastors against the tendency to prioritise money over diligent work to make the church better.