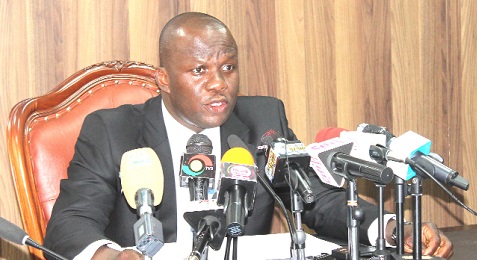 The Minister of Lands and Natural Resources, Samuel Abu Jinapor, has presented 95 new licences to small-scale miners for their mining operations.

The licenses were signed and issued in accordance with the Minerals and Mining Act, 2006 (Act 703) that clothes the sector minister with the power and discretion to sign mining licences.

In issuing the licences at a ceremony in Accra last Tuesday, the minister directed all persons engaged in small-scale mining to go under the umbrella of the Ghana National Association of Small-Scale Miners (GNASSM) as a matter of necessity.

The licences were presented to the national executives of GNASSM, led by its General Secretary, Godwin Armah.

Mr Jinapor explained that although Act 703 required the Minerals Commission to present vetted licences to the minister to sign, he had to vet the applications to ensure that no licence went into the wrong hands.

He said any small-scale miner who failed to go under GNASSM would be regarded as an illegal miner.

"The government has rolled out many interventions to weed out illegal miners. We have made some modest gains, but we know that despite all the efforts we have made, some persons have now turned into what we call all-night miners.

“We will not allow them to continue in this illegality,” the minister said.

The minister observed that a strong small-scale mining sector was the recipe for a vibrant mining industry and that the government had taken a number of steps to regularise the sector.

He noted that interventions such as regulatory reforms, enhanced geological investigations, the community mining scheme, introduction of mercury-free mining equipment and financial support to small-scale miners were part of measures to strategically position the small scale mining sector to benefit the country.

Mr Jinapor said notwithstanding those reforms, illegal mining remained the greatest threat to the sector.

He observed that weeding out the menace and regularising the sector required concerted effort involving all stakeholders.

"We cannot eliminate the illegalities overnight. We need a gradualist and multi-faceted approach to sustainably deal with it," he said.

He added that proper small-scale mining would provide viable employment opportunities in communities to alleviate poverty.

The General Secretary of GNASSM described the government's reforms in the small-scale mining sector as revolutionary.

Mr Armah said the rigorous processes the applicants for licences had been taken through would ensure that only qualified small-scale miners were cleared to work.

He called on all receivers of the licence to strictly follow the relevant terms and conditions since failure to do so would lead to revocation of the licence.

With small-scale mining contributing 35 per cent of gold production in the country, Mr Armah observed that the sector needed to be protected from illegal operators.

He gave the assurance that the GNASSM would collaborate with the government to overcome challenges in the sector.

He commended the government for interventions such as the national and regional mining dialogue, community mining scheme, online application for licence and the introduction of the mercury-free machine.

Such interventions, he said, would turn around the fortunes of the sector.