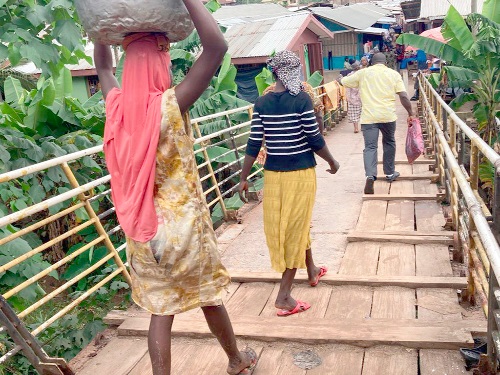 Patrons of the market on the precarious footbridge before its repair
30.5k Shares

The dilapidated footbridge at the Race Course Market in Kumasi, which posed serious danger to users, has been fixed by the city authorities barely three months after the Daily Graphic did a report on it.

The national daily, on October 20, 2022, published a story on the rickety bridge, highlighting the inconveniences it caused to traders and the public in general.

The Daily Graphic report drew the attention of the Kumasi Metropolitan Assembly (KMA) to the need to act swiftly, considering the strategic location of the bridge to users.

Following the repair of the bridge, most traders and shoppers, who had to use the long-winding stretch to get access in-between the market, and the few others who had to risk their lives to use the bridge, are now relieved.

When the news team followed up last Thursday, shoppers and buyers were busily going about their usual trading activities.

The beneficiaries, mostly traders, commended the KMA for responding to their urgent need, while acknowledging the Daily Graphic for taking interest in the welfare of the users.

The metal bridge had grown very weak, almost becoming a death trap, as was evident from the broken rails and rusty metals with gaping holes which users had to walk on, when the Daily Graphic news team first visited the market on Wednesday, September 14, 2022.

The bridge, per its design, was constructed with metals, but with time some portions became rusty, and city authorities had to improvise with wooden slabs.

The side metal railings meant to shield pedestrians from falling into the about 20 feet ditch, then looked feeble and no user dared touch the barricades, nor lean on them when crossing the walkway.