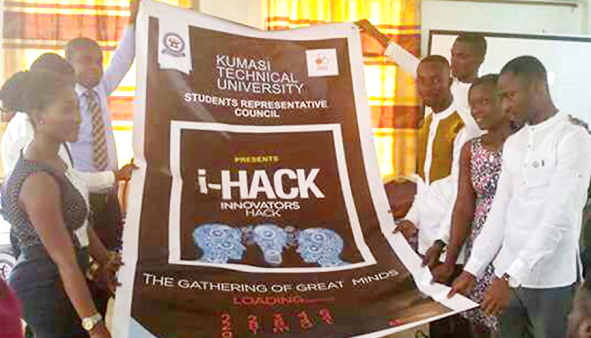 The Student Representative Council (SRC) of the Kumasi Polytechnic (soon to be Kumasi Technical University), in collaboration with Kumasi Hive, an innovation and technology company, has launched a competition aimed at developing the innovative skills of students to solve societal problems.

Dubbed, “Innovators Hack (i-Hack) 2016”, the competition is open to all departments of the institution, but targets mainly students pursuing engineering, technical and applied sciences to come up with creative ideas and also work in teams to design products that will benefit society.

At the media launch of the programme on Monday, the Programme Coordinator of i-Hack, Mr Dennis Asante Sackey, said the competition would focus on five areas, namely, renewable energy, water and sanitation, waste management and recycling, agriculture (post-harvest and smart climate technology) and university and campus challenges.

He said the university and campus challenge segments was for the students to look at the university environments and come up with ideas and solutions that would solve some of the problems facing students on campus.

According to him, the competition is an opportunity for the students to put their theoretical knowledge into practice and prepare them to become self-reliant instead of coming out to join the bandwagon of unemployed graduates.

He said the eventual winners would be linked up with investors and other stakeholders with interest in their products to enable them to commercialise their innovations.

Mr Sackey said the competition would be in four stages starting with the pre-competition section where applications would be received from students.

He said the pre-competition would also involve the conceptualisation and the engineering design process, and a minimum of 200 students were expected to take part in the competition.

Other stages include the competition itself where the participants would be given three months to develop their products; the exhibition where the products would be showcased and the winners declared and the post-competition stage.

The Chief Executive Officer of Kumasi Hive, Mr George Appiah, encouraged students to take advantage of the competition to exhibit their skills and knowledge and make themselves relevant to society.

He said this was the first time an SRC was organising such a competition to unearth the talent of the students and motivate  their fellow students to become entrepreneurs and help reduce the high unemployment rate in the country.

The Dean of Students, Dr Michael Asumang, commended the students for coming up with the competition, which, he said, would help make students critical thinkers and problem solvers.