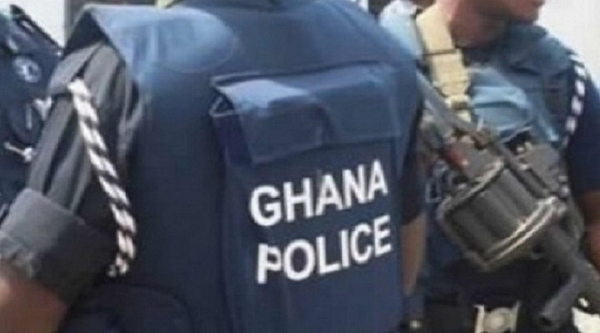 The Ghana Police Service on Friday, October 21, 2022, gunned down an armed robber who snatched an envelope from a bank customer.

The Police in a statement said the armed robber and his accomplice who were on motorbikes attacked a customer who had stepped out of the Fidelity bank, Maakro branch, carrying a brown envelope.

The robbers attacked the bank customer and snatched the envelope amidst the firing of guns.

The rear windscreen and the left door glass of a Daewoo Matiz saloon car which was parked on the bank premises were hit during the shooting.

The Police in a statement said the shootout followed "intelligence that an armed robbery gang was planning an attack on the cluster of banks in the Suame Magazine and Maakro enclave in Kumasi, the Police launched a special anti-robbery operation in which one of the armed robbers was shot".

"The Police, who had mounted surveillance in the area, responded to the situation by firing at the armed robbers and succeeded in hitting the pillion rider who fell off the motorbike. However, the rider who also sustained gunshot wounds, managed to escape.


"One of the police officers was shot by the armed robbers during the exchange of fire and sustained a gunshot wound to his right hip.

"Both the injured officer and the suspect were rushed to the Komfo Anokye Teaching Hospital for medical attention. The suspect was, however, pronounced dead on arrival".

The body of the deceased suspect has been deposited at the morgue for preservation, identification and autopsy.

The Police have also launched a manhunt for the accomplice that escaped.

“We wish to appeal to the public especially those who run health facilities within the Kumasi Metropolis and its environs to report any person seeking medical attention with a gunshot wound, for prompt Police action.

“We would like to commend all the officers who took part in the operation and also wish our injured colleague a speedy recovery,” a Police statement said on Saturday, October 22.