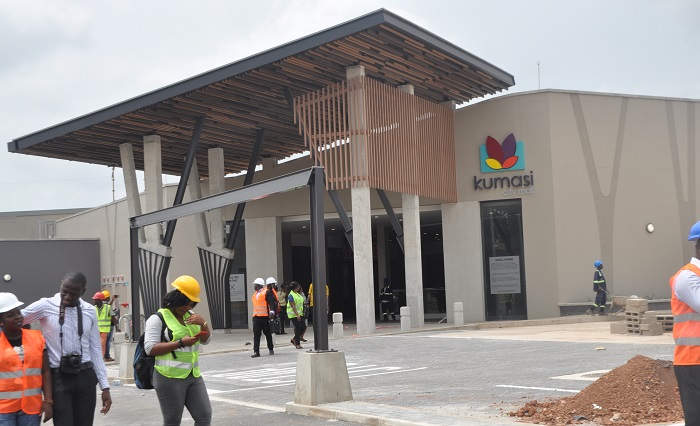 Hundreds of people from all walks of life thronged the first-ever sprawling edifice of the Kumasi City Mall (KCM) not necessarily to shop but, to be part of history as the first people to have gained access to the $ 95 million structure at the opening Thursday morning.

The one-stop destination shopping mall, the first to be opened in the Ashanti region covers all kind of shopping items and entertainment.

For now, Game, one of the tenants of the mall appears to be in full operation to be followed by Shoprite on Thursday, April 27, 2017.

And despite the finishing touches being put up by the rest of the tenants including communications giants, MTN and other banking institutions, the facility provided a perfect ambiance for patrons who appeared to have been attracted by the blurring of assorted entertainment programmes.

Mr. Kofi Sekyere, Chairman of the Board of Kumasi City Mall told journalists that the developer, Delico Property Investments Ghana Limited, is assiduously pursuing an agenda of meeting the shopping needs of the people in the region and provide a competitive environment for businesses to thrive.

He insisted the mall was not targeted at a specific group of people but to meet all kinds of classes and to bridge the gap between the rich and the poor.

The Asantehene, Otumfuo Osei Tutu II, who originally cut the sod for the commencement of the project on June 6, 2014, will subsequently together with President Nana

Akufo-Addo perform the formal commissioning KCM on May 10.

The mall is located at Asokwa, on the confluence of Lake Road, Yaa Asantewa Road and Hudson Street and sits on a total land area of 15.4 acres with a space of 18,500 square metres and potential for further expansion of up to 10,000 square metres.

It is the third straight development by Delico Property Investments Limited, coming after West Hills Mall (2014) and the Achimota Retail Centre (2015), both in Accra.

KCM also provides the bubbly Ashanti regional capital with a modern location for business transactions, social interactions and entertainment. Then over time, as far as food is concerned, this mall will provide a ready market access for fresh produce and help improve local farming techniques and quality control.