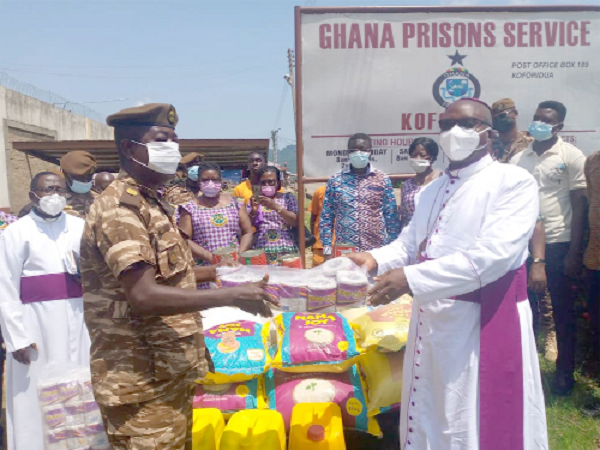 Rt. Rev. Felix Odei Annancy (right), Bishop of the Koforidua Diocese of the Anglican Church, presenting the items to Superintendent Nana Osafo Suronipa, the Officer in charge of Service of the Koforidua Prisons, on behalf of the inmates last Friday

The Koforidua Diocese of the Anglican Church has donated assorted items worth GH¢5,000 to the inmates of the Koforidua prisons in the New Juaben North Municipality in the Eastern Region, as part of activities to mark the 40th anniversary of the diocese.

The items included bags of rice, beans, gari, gallons of cooking oil, canned tomatoes and toiletries among others.

Presenting the items at the premises of the prisons, the Bishop of the Diocese, Rt. Rev. Felix Odei Annancy, said the donation was to help those in need while supporting the government's efforts towards the upkeep of the inmates.

He said the presentation was a clear biblical mandate as well as an indication that Jesus shared in the pain and cared for prisoners, and therefore required the same from his followers.

Rt. Rev. Annancy said their unfortunate situation notwithstanding, the church had remembered them with such assistance to ease their plight.

He, therefore, appealed to other Christian organisations to assist the prisoners since they were "our brothers" who must be visited regularly.

The Officer in charge of Service of the Koforidua Prison, Superintendent Nana Osafo Suronipa, who received the items on behalf of the inmates, said the donation was an immense assistance since the cost of items had gone high.

He added that the food items would improve the diet of the inmates.

Superintendent Suronipa explained that the government alone could not cater for the feeding of the inmates, as such religious organisations as well as other philanthropists should assist in that respect.