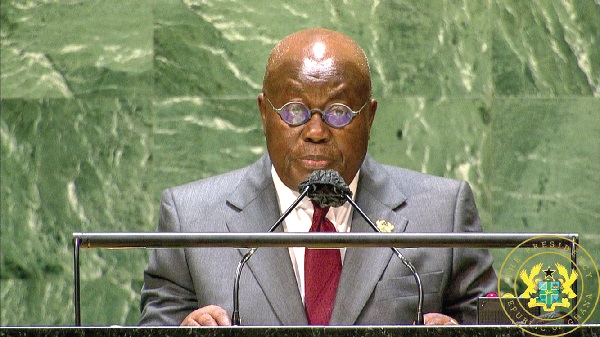 President Nana Addo Dankwa Akufo-Addo has described as an "unfortunate development" the recent decision of some European countries not to recognise the Covishield, the Oxford AstraZeneca vaccine manufactured in India.

According to the President, It was intriguing that the Covishield vaccine was donated to African countries through the COVID-19 Vaccines Global Access (COVAX) facility.

Addressing the United Nations General Assembly today, President Akufo-Addo said the use of vaccines as a tool for immigration control would be a retrogressive step in the fight against COVID-19.

"One unfortunate development appears to be the recent measures on entry to some countries in Europe which suggest that Covishield, the Oxford-AztraZeneca vaccine manufactured in India is not recognized by these countries," the President said.

"What is intriguing, is the fact that this vaccine was donated to African countries through the COVAX facility. The use of vaccines as a tool for immigration control would be a truly retrogressive step".

COVAX, is a worldwide initiative aimed at equitable access to COVID-19 vaccines directed by Gavi, the Vaccine Alliance (formerly the Global Alliance for Vaccines and Immunization, or GAVI), the Coalition for Epidemic Preparedness Innovations (CEPI), and the World Health Organization (WHO).

It receives funding from donors including the United Kingdom which before U.S. involvement, was the biggest COVAX donor with more than $730 million pledged as of December 2020.

The UK government today clarified that the Covishield AstraZeneca vaccine is an approved jab after protests in India over its earlier decision not to recognise it.

On Tuesday, India described the rule as "discriminatory" and asked the UK to stop requiring fully-vaccinated Indians to self-isolate on arrival.

Speaking about Ghana's COVID-19 vaccination campaign, the President said the country had so far administered five million doses of vaccines to "frontline health workers and those classified as being most at risk".

He added that the country was still hopeful of vaccinating 20 million Ghanaians by the end of the year.

"We, in Ghana, have, so far, received five million doses, which have been administered to frontline health workers and those classified as being most at risk. Five million is not a figure to be sneered at, particularly when we consider the situation in many other African countries," President Akufo-Addo said.

"We are grateful that our efforts at the management of the pandemic and vaccine distribution have been recognised, and we have received these amounts so far. We are still hoping to vaccinate twenty million of our people by the end of the year".