Is the Accra-Tema Motorway becoming a death trap?

The Accra-Tema Motorway is fast deteriorating; it is becoming a death trap, with high traffic growth and encroachment on both sides.

The 19km motorway is the oldest paved road in Ghana and was opened to traffic in November 1965 to link the harbour city of Tema to Accra.

Certain portions of the road (the concrete) have virtually been removed with iron rods exposed to the detriment of drivers who either have to swerve or fall in.

The median of the road has overgrown with weeds, breeding reptiles in the process. This most often reduces visibility.

Currently, many diversions have been created by some people to enter both sides of the roads. This usually causes several accidents as drivers from Community 18 enter the highway without looking.

A careful observation of the road reveals serious cracks on most of the bridges.

There are several expansion works on the entire stretch of the highway, making driving very difficult.

Some drivers usually use the shoulders of the road to avoid staying in heavy traffic. This has contributed to the destruction of the road and is the cause of most accidents.

Speeding has contributed to major accidents on the motorway, leading to death and many injuries. Unnecessary overtaking has also been one of the causes of accidents on the road. Most drivers who ply that stretch of the road overtake recklessly, creating several dangers on the road despite road signs educating drivers on speed limit. A fortnight ago, the Daily Graphic reported a fatal accident which claimed the lives of two people who were travelling from the Volta Region.  Aside speeding, it has come to light that the rails supporting the bridge were not strong enough to protect trucks from entering the ditch. 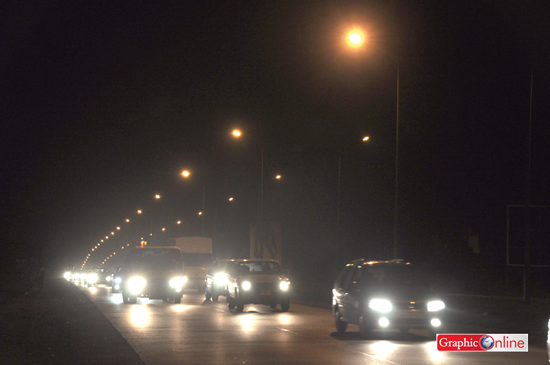 A major problem that exists on the motorway is poor illumination. The streetlights have become white elephants as they have been beautifully arranged but do not function.

After all these neglect, efforts have been made by successive governments to illuminate the entire stretch of the road but have proved futile as some drivers, in a bid to save their lives, have used them as shields, destroying them in the process whereas others have stolen the bulbs. One can count over 50 streetlights that have been destroyed by drivers and have been left unattended. Also the live electrical wires from damaged streetlights have been exposed to the rain and other dangerous substances which could create problems for road users.

I suggest that it could be ideal if solar panels were rather used as streetlights on that stretch of the road considering the amount of sunlight available during the day. Another surprising thing I observed was that the streetlights are usually on during the day but off at night. What at all is wrong?

These activities have stalled the exercise of providing the entire stretch of  road with streetlights by the Electricity Company of Ghana (ECG) and the Ghana Highway Authority (GHA).

Armed robbers on the other hand have taken advantage of the situation to rob people of their cars and other valuables.

Despite the patrols by the Ghana Police Service, these robbers are able to conduct their nefarious acts without being caught.

I drove on the motorway on Thursday morning and these were some of the things I saw. Some portions of the motorway have been opened to drivers to make U-turn to either continue their journey to Tema or Accra. These acts have led to most of the accidents on  that road as most drivers enter without watching carefully.

Surprisingly, a police checkpoint has been mounted close to the Trasacco Valley where residents living in those areas enter the motorway . Although the National Road Safety Commission has intensified education on such acts, these practices have continued unabated. Heavy rocks have been placed on such locations to prevent drivers from using them but have not been successful as some drivers are able to meander their way through other means to their destination. 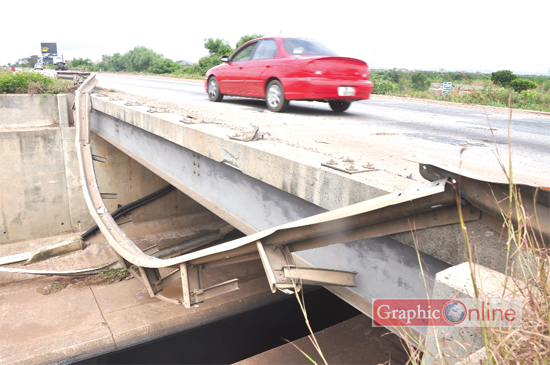 Most of the rails protecting drivers from entering into gutters on the motorway have been removed as a result of careless driving and lack of maintenance. most of them have either rusted or become weak. Due to this, a fatal accident occurred on the motorway last Tuesday, killing the driver and his mate instantly as the rails could not prevent them from falling into the ditch.

A police dispatch rider on his normal patrol arrested a stubborn driver who decided to use the shoulders of the road when there was traffic. All he (the driver) said to the police officer was that his “boss” wants to speak to him. These are some of the challenges polica officers go through while on duty.

The shoulders of the road are gradually becoming a market place as people have taken advantage to sell their wares to passengers on the road. This is dangerous as they could be knocked down when the breaks of drivers fail them.

The Accra -Tema motorway was designed to prohibite pedestrian movement, parking areas or U-turns. Moreover, until recently, no road joined the motorway at any other section except the entry and exit points. 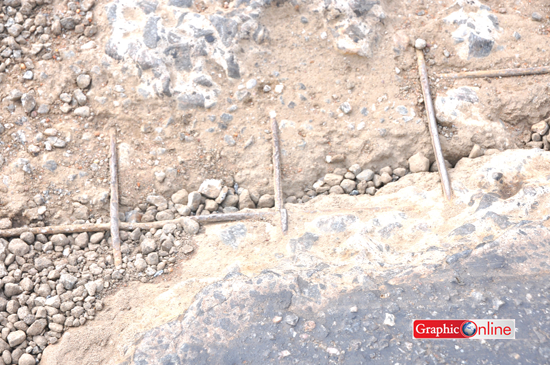 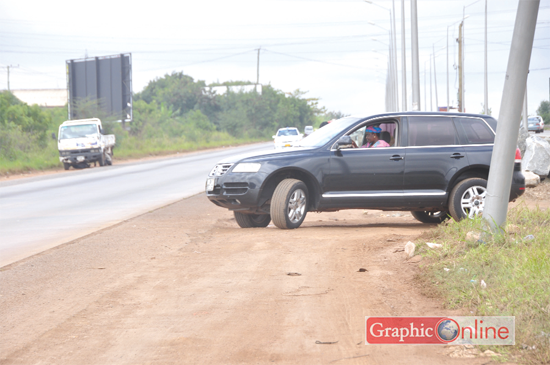 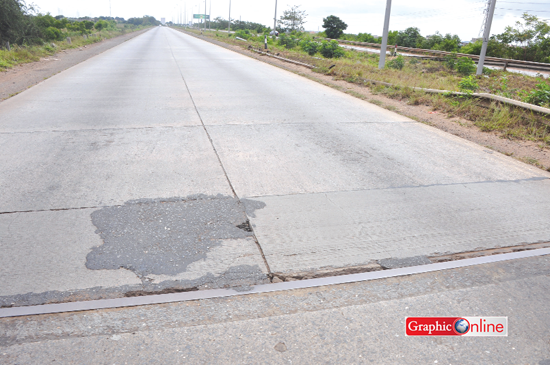