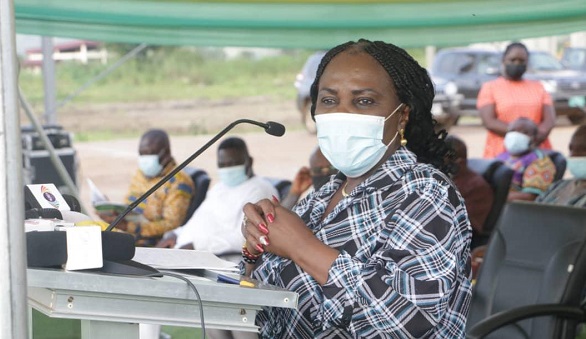 The Minister of Sanitation and Water Resources (MSWR), Ms. Cecilia Abena Dapaah, says that the completion of the Integrated Recycling and Composting Plants (IRECOPs) across the country will help to eliminate pockets of refuse seen in the towns and cities.

She described the IRECOPs as novel recycling plants which will not only be connecting and treating waste but adding value to the waste as well.

Madam Dapaah made the assertion on Tuesday, September 7, 2021, when she paid a working visit to the construction site of the IRECOP project at Ho in the Volta Region.

The minister’s visit formed part of a three-day tour in the Volta and Oti Regions to inspect ongoing government projects in the water and sanitation space in the two regions. In the Volta Region, she inspected three projects; two in water and one in sanitation.

She said the IRECOP project was a collaboration between the government of Ghana and the private sector, noting that waste in the regions would be hauled to IRECOP locations where they will be treated and worked on.

Ms. Dapaah noted that the project will be completed by the end of the year and commissioned by the President.

She said the setting up of the MSWR has paved way for a lot to be done in the water and sanitation sector.

“I am happy that we are effectively collaborating with the private sector to have very important projects like this IRECOP in Ho and in all the regional capitals. The ministry's vision is also to tie in the President's vision to make Ghana a clean country, especially our capitals,” she averred.

Earlier during an inspection of water treatment plant at Adidome in the Central Tongu District, Ms. Dapaah reiterated that the government was on course to achieving the Sustainable Development Goal (SDG) 6 on Clean Water and Sanitation by the year 2030.

This, she pointed out, was evident in the huge investment made by the government in the water and sanitation space across the country.

“…it is very important that we get the parameters right. Sod has been cut for some of the water projects in the Volta Region. Last year, we were privileged to have His Excellency cut a sod for eight (8) major water projects totalling GHC1.40 billion US dollars which will give 4.5 million people access to water.

"It is a huge input into the water sector. If I add up what will be in rural water which amounts to about 1.2 million people, you can see that the government is on course to achieving the SDG 6 on Water and Sanitation by the year 2030,” she said.

She indicated that the project was the third phase of the five-town water project in the Volta Region.

She also disclosed that the third phase will add on a very important component which will cost Ghana 11.5 million Euros and the contractors are Messers Strabag AG from Vienna Austria.”

The minister, however, assured that the Sanitation Ministry will ensure that the local content component of the contract was adhered to as directed by the President.

For phase three of the water projects, Mrs. Dapaah revealed that “we will be adding 10 kilometres of mainline distributions.”

“We are also adding 73 standpipes, and in the Adaklu District, we will create 163 standpipes and transmission lines as well as.

She said the project was scheduled to be completed in 24 months, giving assurances they would ensure that the contractor finishes on time.

The minister is expected to inspect the Keta Keta Water Treatment Plant today at Agordorme in the South Tongu District.

The Volta Reginal Minister, Dr. Archibald Yao Letsa, in a welcome address reiterated the importance of water and sanitation to the development of the people in the region and Ghana.

He commended the government for the several water and sanitation projects ongoing in the region saying that it will help improve development of the region.