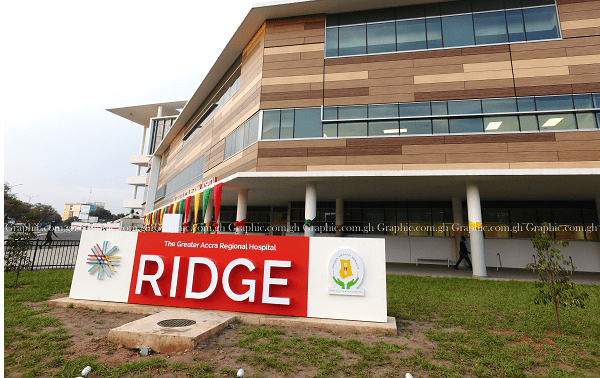 The management of the Greater Accra Regional Hospital (Ridge Hospital) has initiated investigations into circumstances surrounding the death of the wife of the Director of the Ghana Institute of Languages, Dr Emmanuel Kuto.

In a post on Facebook, Dr Kuto alleged that his wife, Kafui, died after surgery at the hospital because a doctor prescribed the wrong medication for her.

In response to the post, the Medical Director at the hospital, Dr. Emmanuel Srofenyoh, has said that preliminary investigations have begun to ascertain the exact course of death.

He added that and that a committee of enquiry will be set up to probe the death.

Dr Kuto chronicled the events that led to the demise of his 48-year-old wife.

They had three kids with the eldest being 15-years-old.

Read the narration below

Folks, last night I lost my wife at Ridge Hospital.

My wife checked in at the hospital Sunday evening. She had been due for surgery Monday morning.

We agreed that I would return to the hospital in the afternoon when she would have returned from the theater.

That’s how it happened. I returned to her. She narrated the experience to me. I stayed with her till 8pm when the orderly came to ask me to leave.

When I returned the next morning, my wife had taken a turn for the worst. She was sweating profusely and was in severe pain. The change was really dramatic.

I asked her if the doctor had seen her. She said no but the nurse had given her medication earlier on. She asked me to take her to the washroom. By this time she was screaming in pain.

I managed to sit her on the WC. But as she attempted to relieve herself she suddenly went limp and crumbled onto the floor. She was unconscious.

I rushed out to seek help. A couple of nurses came in to help. She regained consciousness but she was in a terrible shape.

The next one hour was hell as there was no doctor immediately available.

After about an hour the doctor arrived. He examined my wife and asked the nurse what medication had been administered. The nurse mentioned something I don’t remember. The doctor asked if she was sure and she said yes.

The doctor then went through my wife’s folder for a few minutes.

My heart missed a beat.

There was a back and forth between the doctor and the nurse, which attracted two other nurses.
One of the new entrants said yes, he the doctor didn’t prescribe it but another doctor did so later.

The doctor said he was going to call him right now. He walked out the room followed by the nurses.

I followed them into the lobby.

He picked the phone and called someone. From the conversation, it was clear that the other doctor had promptly admitted to prescribing the drug.

Folks, I swear by my father’s grave that my wife’s doctor said something like this.

“ I can’t believe you have done this again. This is the second time. This woman’s case is similar to the other one but you have done it again”.

Folks, at this point I started feeling very cold.

Yes, my wife lay dying and the nurses were laughing that a doctor had apparently prescribed the wrong medication for her. I was not angry and I was not mad.

In the end I was left alone with my wife.

At 8 pm the orderly came to ask me to leave.
I drove home filled with a huge feeling of emptiness. I could not sleep. I tossed around in bed the whole night. At around 4 am I fell asleep.

My sister-in-law was to take up the relay this morning. I was to go and teach my students and then return to replace her. We took turns taking care of my wife.
My sister-in-law called me at 6 am which is the visiting time at the hospital.

“Brother Imma, are you coming? The doctors want to see you immediately”.

“I am on my way”, I lied. I hurriedly jumped into a crumpled jeans and an old Lacoste. I did not bath. I did not brush my teeth. I don’t know how I drove to Ridge Hospital.

My wife died at 11 pm last night, three hours after I left her.
A lady in the ward told me she collapsed and died. Just like that.

By the way, my sister-in-law told me that when she got to the ward this morning she overheard doctors and nurses arguing over “wrong medication”.
I am not angry. I am sad. Deeply sad. Indescribably sad.

Folks, let’s be clear. I have no evidence that the wrong medication killed my wife. I have requested for an autopsy.

I also appreciate the efforts made by some of the nurses to save the life of my wife. One particular nurse was very kind to me and I pray God’s blessings on her.

What I cannot accept, and why I am writing this, is that health workers find it funny that the wrong medication had apparently been administered to my wife. They were laughing. It was a joke. My wife’s life was a joke.

My wife heard the whole story unfold. How did she feel lying there listening?
I kept thinking “Is my wife’s life worth so little”?

Now I have been thinking. I am a senior public servant, the head of a public tertiary institution. If this happened to me then I shudder to think of what can happen to an ordinary person in our country.

Folks, I am not courting sympathy. I have thought carefully before posting this.

Here is the thing:
Nobody, absolutely nobody deserves to experience this. It falls far below any idea of human decency. This should never happen again.

That is why I am calling out Ridge Hospital.

I am asking you a special favor. Please, help me call out Ridge Hospital.

It is me today. It could be you tomorrow.
Please, share my post again and again till it gets to the authorities of Ridge Hospital.