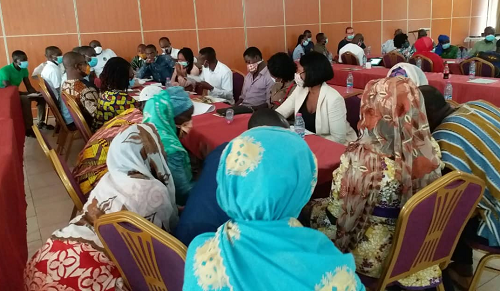 The Global Shea Alliance (CSA), a non-profit association of players in the Shea industry has initiated a move to increase the population of Shea trees and protect existing ones from being cut down for charcoal burning and firewood.

The initiative which was launched in Tamale, the Northern Regional capital seeks to protect the existing stock of Shea trees and grow 10 million new ones over the next 10 years.

It is also aimed at developing Shea parklands plantation and restore existing ones that has been degraded as a result of the wanton cutting down of the tree for charcoal making to help sustain the Shea industry, which is considered as a source of livelihoods for many in Northern Ghana, especially women and the youth.

The managing Director for the GSA, Mr Aaron Adu who launched the initiative at a Shea stakeholder's forum held in Tamale, last Thursday, November 5, 2020 said a $9million funding has been secured from the Green Climate Fund in partnership with the United Nations Development Programme (UNDP) and the Forestry Commission which would be used for the implementation of the initiative next year.

He said the funding which is in the form of a grant can be accessed by members of the GSA including the various women cooperatives in the Shea value chain to help achieve the objectives of the initiative of growing new 10 million Shea trees and protecting existing ones.

He said the initiative is not only aimed at restoring degraded parklands but also to help preserve the ecosystem of communities to enable them to become resilient to the effect of climate change.

He noted that the rate at which Shea trees are being cut down for charcoal and firewood there was the need for an urgent action from all stakeholders to replace the lost trees and protect existing ones to sustain the Shea industry.

The demand for Shea

Mr Adu stated that for the last 20 years Shea supply has grown over 600 per cent in the food and cosmetics industries globally and by the year 2044 demand for supply cannot be met , hence the need to take urgent steps to protect and sustain the industry for posterity.

Dr Julius Yeboah, a   Senior Research Scientist with the Cocoa Research Institute of Ghana (CRIG) sub station at Bole in the Savannah region said through intensive research the gestation period for Shea trees fruiting has been reduced from 15 years to three to four years.

He said people were not interested in planting Shea trees because it takes between 12 to 15 years before fruiting but through the work of the CRIG sub-station at Bole this has been reduced to three to four years and therefore we are encouraging farmers to come for the grafted Shea trees seedlings for planting.

He stated that the CRIG sub-station in Bole has been supported by the Ghana Cocoa Board (Cocobod) under the government's flagship programme Planting for Export and Rural Development (PERD) to set up nurseries for Shea tree seedlings across the five northern regions for supply to farmers and various women's group for planting.

He said the initiative is to increase the Shea trees population and also to develop parklands.

"We have used grafting to reduce the gestation period of Shea trees to about four years. We also have what we called rooted cuttings which is also four years approaches", he stated.

Dr Yeboah stated that CRIG has stated training people in Shea parklands development, adding that CRIG substation in Bole has 150 Shea parklands plantation in three communities in the Savannah region; 50 acres in Damongo, 50 acres in Bole and another 50 acres in Sawla which was funded by the Food and Agriculture Organisation (FAO).

He said the challenge now is that they needed people to train them in the grafting approach to replicate them in their communities, saying instead of planting in the field you graft them and send them to the field and that within one year you see the growth between it and the one in the wild.

"The original gestation period for Shea trees to fruit is 15 years and beyond but through our intensive research at the CRIG substation in Bole we have been able to reduce it to three years so we urged the people in the communities to come for the Shea tree seedlings and plant", he stated .

The District Chief Executive (DCE) for North Gonja in the Savannah Region, Mr Adam Eliasu who delivered the keynote address at the forum appealed to traditional authorities to support the assemblies in the fight against the cutting down of Shea trees for charcoal and fuel wood.

He said until traditional authorities and the people were made to understand the economic value and potentials of the Shea tree the cutting down of the trees for charcoal and firewood would continue.

"We in Northern Ghana must begin to see the economic importance of the Shea trees and begin to protect them and also find means of replacing those lost trees for the benefit of the present generation and those who are yet to come", he stated.

The forum brought together scientists, the various women's cooperative groups in the Shea value chain , civil society organizations (CSOs), traditional authorities, local government actors among others to deliberate on actions that could be taken to restore the degraded Shea parklands.

Shea tree grows in the wild and in Ghana, it could be found in large quantities in the five northern regions with few also in some parts of the Volta and Bono regions. The peak season for shea nuts in the Northern Region is between the month of April and August.

Shea butter is derived from the sheanut tree, with the botanical name ‘Butyrospermum parkii’ or Vitellaria paedova” and is a common wild tree that grows extensively in the dry Savannah belt of west Africa, stretching from Senegal in the west to Sudan in the east.

The Sheanut tree also thrives along the foothills of the Ethiopian highlands. Apart from Ghana, the tree can be found in 18 other countries in Africa.

In Ghana it grows extensively in the Guinea Savannah, but Land mass less prolific in the Sudan Savannah. It covers a landmass of about 77,670 square kilometres in the Northern, Savannah, North East, Upper East and Upper West regions of Ghana.

Now with the scientific breakthrough in the reduction of the Shea tree gestation period from 15 years to three to four years now people can now go into Shea plantation development.