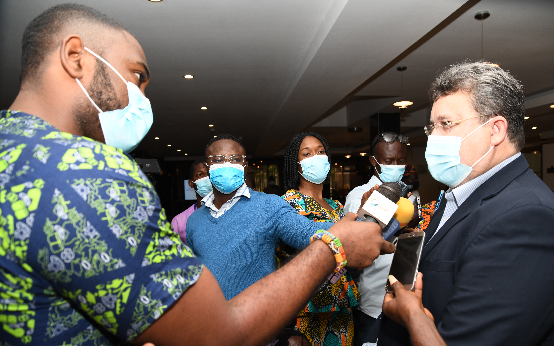 Mr. Pierre Laporte, World Bank Country Director to Ghana, granting an interview to some media men after the opening session of the dissemination workshop on Pollution Management and Environmental Health. Picture: EBOW HANSON

The World Bank has urged the country to include air pollution control measures when developing investment plans and policies.

This follows a report contained in the bank’s 2020 Country Environmental Analysis (CEA) that air pollution was responsible for 16,000 premature deaths in the country each year — a figure that is projected to increase to approximately 46,000 deaths by 2030 “if no action is taken”.

Addressing the media at a workshop on the bank’s pollution management and environmental health (PMEH) programme in Accra yesterday, the Country Director of the World Bank, Mr. Pierre Laporte, said urgent action was required to protect the environment and save lives.

“We should look at development through the climatic lens. In order to change the situation (air pollution), Ghana needs to make sure that in designing its development objectives and investment plans, it takes into account actions and activities that will address the shortcomings.

“Today, we are still cooking with wood, which destroys the environment. We have natural gas, which is a cleaner option. We should look at these kinds of options, so that we can protect the environment and save lives,” he added.

According to the bank’s CEA report, an estimated 20.5 million Ghanaians (over 70 per cent of the population) burnt solid fuels such as fuel wood, charcoal and dung in their homes.

It indicated that out of the 16,000 air pollution related deaths recorded annually in the country, 8,500 were in the urban areas, while 7,600 occurred in the rural areas.

It also revealed that approximately 66 per cent of the deaths in rural areas were due to household air pollution (HAP).

The report further indicated that the economic cost of air pollution stood at $2.5 billion in 2017, representing 4.2 per cent of Gross Domestic Product (GDP) for that year.

He appealed to the media and civil society organisations to take a keen interest in air pollution as a major public health concern and promote the adoption of practices that would safeguard the environment.

The Deputy Executive Director for Technical Services at the EPA, Mr. Ebenezer Appah Sampong, said open burning of waste was a key source of air pollution in the country and appealed to the public to refrain from that act.

He said the EPA, in collaboration with its partners, was developing a national policy on air quality management to help set standards and strengthen the implementation of existing regulations.