The area that has really affected major parts of the world is the supply of farming inputs such as chemicals and fertiliser, basic commodities needed to boost farming activities.

This obviously has dire consequences on global food security as it is becoming extremely expensive to grow a crop, and so the likelihood of a lot of farmers around the world reducing the acres of production is very high.

Currently, a bag of fertiliser for the 2022 farming season is selling between GH¢350 and GH¢400, and this clearly is far above what the smallholder farmers who are mainly responsible for the food on our tables every year can afford.

It is estimated that smallholder farmers contribute over 90 per cent of our food needs at home, but unfortunately, this is the group of farmers heavily affected by the current development.

Africa and Ghana definitely are the hardest hit because apart from Morocco, Egypt, South Africa and the latest entrant, Nigeria, courtesy of business mogul Aliko Dangote, none of the countries in Africa produces fertiliser and, therefore, rely 100 per cent on the import of the commodity.

It is in this respect that affected countries need to find alternative and innovative ways to deal with the current challenges to improve food production to avert any food shortage.

One of the major ways governments in the sub-region is taking to address the challenge is the setting up of a Ministerial Sub-Committee on Fertilisers of the African Union to mobilise fertiliser for farmers in the sub-region.

The committee, chaired by Ghana’s Minister of Food and Agriculture, Dr Owusu Afriyie Akoto, is seeking financial support from various banks in the sub-region to secure one million metric tonnes of fertiliser for distribution to the respective countries.

The sub-committee meeting was to ensure that its members were aware of its mandate to mobilise all 15-member countries in the implementation of the initiative launched on 19th May, 2022 and to work towards the establishment of an urgent mechanism for the supply of fertilisers to farmers in the region for the 2022 agricultural season.

It is also to promote discussions for a solid basis for a virtuous cooperation among governments, the private sector and financing banks, notably the ECOWAS Bank for Investment and Development (EBID), the African Development Bank (AfDB) and others.

While waiting for regional arrangement for the fertiliser, the Ministry of Food and Agriculture is encouraging farmers to turn to organic fertiliser in place of the NPK, which is now very scarce and very expensive where it is available.

As part of efforts to address the shortage of agro-chemicals in the country, the ministry is collaborating with local fertiliser producers to produce quality organic fertilisers on a large scale for use by farmers. 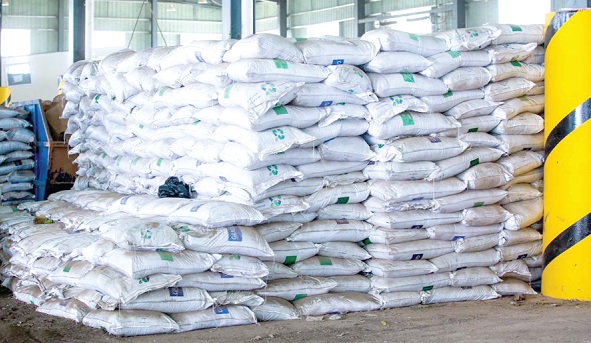 Consequently, the ministry held a stakeholder meeting with local fertiliser producers on the production and promotion of quality organic fertilisers domestically and has commissioned 18 companies in the business to produce for the Ghanaian farmer.

Recently, Dr Akoto, after a tour around the Accra Compost and Recycling Plant (ACARP) owned by Zoomlion Ltd to familiarise himself with the facility’s operations, urged organic fertiliser suppliers to help farmers by increasing their supplies to whatever limit they could produce in the face of the current fertiliser shortage.

During an interaction with journalists, he said despite the challenges brought forth by the global shortage of inorganic fertilisers as a result of the Russia-Ukraine crisis, there was an opportunity for organic fertilisers to penetrate the market.

The position of the minister has the Kumasi Compost site inundated with orders from farmers for the organic fertiliser.

This, Dr Akoto believes, is due to the awareness created since the inception of the Planting for Food and Jobs programme which introduced farmers to organic fertilisers, a product whose importance they have now appreciated.

The minister said the challenges occasioned by the lack of the inorganic fertiliser were being compensated for by the good rainy season being experienced and the job opportunities for the youth at the various local organic fertiliser-producing sites.

Dr Akoto was excited that the local farmer was not sitting down throwing his hands in the air in despair, but was fast in switching to the organic fertiliser instead of the inorganic that they had been used to over the years.

He said the heavy rains, coupled with the high demand for organic fertiliser and the huge quantities of food surpluses for last year in the food-producing areas is an indication that there is no food shortage and there will be none.

The minister, again, discounted any fears of food shortage in the country and assured Ghanaians that food was available at the quantities that could guarantee food sufficiency and security.