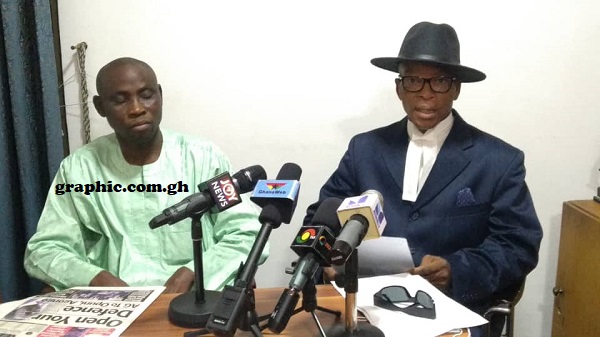 The Chief Executive Officer (CEO) of Bahmed Travel and Tours, Alhaji Ahmed Bandoh has refuted allegations that he was involved in the operations of a fake currency syndicate that was busted at the Kotoka International Airport.

"I am not a criminal as they claim, I don't have any criminal records and as I speak with you, I am a final-year law student and I respect the rule of law in this country," Alhaji Bandoh said today at a press conference in Accra.

"I will never assault a senior military officer and I want to make it obvious to the whole world that I have never associated myself with any fake currency. I refute the allegations levelled against me for having any involvement with the recent fake currency saga".

He stated that he only accompanied the lawyer of one Alhaji Mohammed to the National Security Headquarters after the latter had been arrested in connection with the printing and distribution of fake currency on Monday, April, 27.

He said they were both prevented from seeing the officer in charge of the operations.

The National Security statement said Alhaji Bandoh had claimed to be "a Presidential Staffer at the Castle" and the client of Yassei Alia, a Syrian who was among 13 persons who were arrested for their alleged involvement in the printing of the fake currency.

The statement added that he (Alhaji Bandoh) "drove to the National Security headquarters, verbally assaulted the leader of the operation, and vowed to free the suspects.

"It said the aggressive conduct of Alhaji Bamed, suggested that he might be involved in the deal, particularly when investigations are ongoing".

However, daring the National Security to substantiate the allegations, Alhaji insisted he has no knowledge of the claims.

"I dissociate myself from the fake currency saga and I am categorically stating that I have no knowledge of the alleged claims," he said.

Accra: Gang busted with over $5million in fake currency at Airport

Alhaji Bandoh and his lawyer Mr Prince Frederick Nii Ashie Neequaye in separate comments urged the National Security Secretariat to intervene in the matter, else they would seek legal redress by suing for defamation.

"I am appealing to the National Security and the Military High Command to intervene in this matter because they have actually soiled my reputation and I am going to seek legal action to repair my reputation".

The National Security on Monday, April, 27 arrested a 13-member gang involved in the printing and distribution of fake currency notes to unsuspecting victims, mostly foreign nationals.

A statement issued by the National Security Secretariat said the gang, led by one Yassei Alia, a 45-year-old Syrian resident in East Legon, and owner of Hardford Auto Service in Accra, together with Danjuma Zakaria, alias Alhaji Mohammed, 49 and resident of Tema West, were rounded up in a warehouse within the premises of NacCharter Cargo and Freight Company, near KLM offices within the Kotoka International Airport.

Freshly printed $10,000 bundles of fake $100 notes concealed in two large metal trunks and a suitcase were retrieved from the warehouse. The statement said the amount was estimated to be over five million United States Dollars (USD).