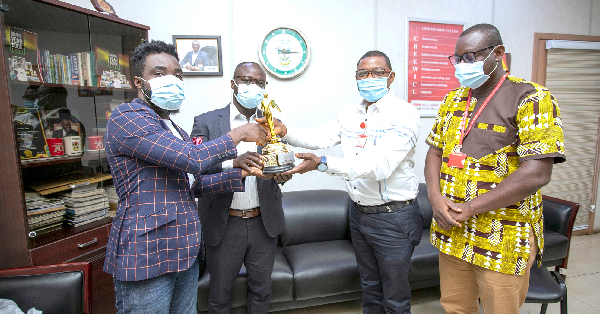 Mr Kobby Asmah (2nd from right), Editor, Daily Graphic, receiving the Newspaper of the Year Award presented to him in his office by Dr Kwabena Abrokwa (2nd from left), Board Chairman, and Mr Prince Markey (left), CEO, both of Big Events, the organisers of the RTP Awards. With them is Mr Samuel Doe Ablordeppey, News Editor of the Daily Graphic Follow @Graphicgh

Big Events Ghana, organisers of the Radio and Television Personality Awards (RTP), has presented an award to the Graphic Communications Group Limited (GCGL) for winning the Newspaper of the Year Award at the recently held event which took place at the Movenpick Ambassador Hotel Accra.

The Board Chairman of the RTP, Dr Kennedy Kwabena Abrokwa, was accompanied by the CEO of RTP, Prince Markey, to present the award to the Editor of the Daily Graphic, Mr Kobby Asmah at the GCGL head office in Accra yesterday.

Dr Abrokwa described the Daily Graphic as the pacesetter in the newspaper production industry, a position the paper had maintained for many years.

The paper, he said continues to produce phenomenol stories each passing day.

“It is obvious that the Daily Graphic is the pioneer in the newspaper business that has earned you the respect of many over the years.

“The board members came together and decided to honour you with this award.

The public voting for the paper was very encouraging,” he added.

The Editor of the Daily Graphic, Mr Asmah, expressed appreciation to the organisers for the recognition.

He described as laudable the fact that the RTP had added the print media to the to the awards scheme which previously looked at the work of the electronic media.

“I think it is a very laudable idea that the RTP has expanded the scope of interest because the electronic media consume what the print produces.

It is, therefore, in the right direction that the RTP has included the print media to the awards scheme,” he added.

He said the Daily Graphic and its sister brands-The Mirror, Graphic Business, Graphic Sports, Graphic Showbiz, Junior Graphic as well as its online platforms —from the group will continue to remain the conscience of the nation with the ultimate objective of serving the public good and interest.

A total of 63 individuals and institutions were honoured at the event.