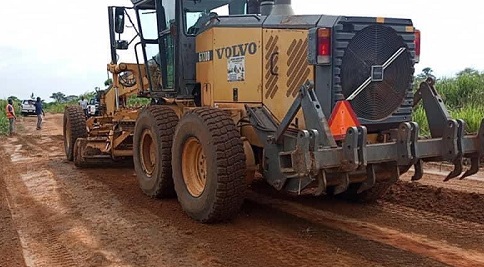 Farmers at Asonkwaa in the Nkoranza South Municipality in the Bono East Region will now heave a sigh of relief as a result of the rehabilitation of the Bonsu-Asonkwaa-Beposo feeder road.

For many years, farmers in the farming community and its surrounding communities have experienced post-harvest losses since it was impossible for vehicles to ply the road to cart their produce, particularly yam, to the marketing centres during the rainy season.

Some of the surrounding communities are Nyamebediamawo (which literally translates ‘God will fight for you’), Nyamesomeyede (meaning serving God is nice), Apesika, Beposo and Punpunase.

The Daily Graphic reported about the plight of the farmers in its Wednesday, July 25, 2018 issue and followed up with another publication in the Saturday, May 28, 2022 edition, highlighting the deplorable state of the road and its effects on farmers and expectant mothers.

It was in response to these publications that the Member of Parliament (MP) for Nkoranza South, Emmanuel Kwadwo Agyekum, came to the aid of residents in area.

Mr Agyekum told the Daily Graphic in a telephone conversation that he used his personal resources and part of his share of the MPs’ Common Fund to reshape dangerous portions of the road.

He explained that his share of the Common Fund alone was woefully inadequate to rehabilitate the entire road, saying, “I would have exhausted the entire fund if I attempted using it only. So I used my personal money to support the rehabilitation.”

However, while the residents are happy and have commended the MP for his gesture, they have appealed to the government to tar the road to solve the problem once and for all.

Before the reshaping of the road, it was riddled with potholes, while erosion had also eaten up parts, thereby making driving difficult and dangerous for drivers to ply on.

In addition, when it rained, parts of the road were covered with water, making it difficult and risky for drivers to drive through.

The poor state of the BonsuAsonkwaa-Beposo feeder road, which links the Nkoranza-Techiman Highway, has frustrated farmers for more than 30 years.

Drivers who go to the area to cart foodstuffs to major marketing centres such as Kumasi, Techiman and Nkoranza, for several years refused to use the road during rainy seasons because they risked getting stuck in the mud as a result of its bad state.

In 2018, foodstuffs, especially yam and watermelon, which are the major crops cultivated in the area, were locked up in the community because trucks could not access the area due to the deplorable nature of the feeder road. 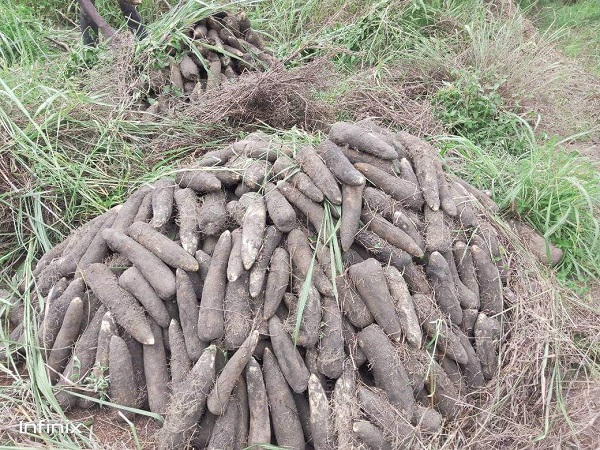 When the farmers saw that they risked losing their farm produce, they mobilised themselves to fi x portions of the dangerous road before drivers were able to use it.

Even after that, they had to rely on the services of tricycles to cart produce from the villages to a point on the road before other vehicles could transport them to the markets across the country.

Food basket
Asonkwaa and other communities in the area are leaders in the production of yam in the municipality and second in the region after Atebubu in the Atebubu-Amantin Municipality.

Last year alone, Asonkwaa and its surrounding communities produced a total of 128,905 tonnes of varieties of yam.

In the area, only few farmers, especially female farmers, are into the cultivation of other food crops such as cassava, maize, plantain, groundnuts and beans.

The only preferred means of transportation in the area was the motorbike, because it was better to use that on the poor roads.

In the previous publications by this paper, the farmers made a passionate appeal to the government to rehabilitate the road to enable them to transport their produce smoothly.

Mr Agyekum said he took the action because the road was terrible and with the current economic challenges, he did not think that the government was ready to reshape it for the farmers.

“With the current economic situation in the country, it will be difficult for the government to work on the road,” he stated, explaining that he took the action to alleviate the plight of the people, particularly farmers in the area. 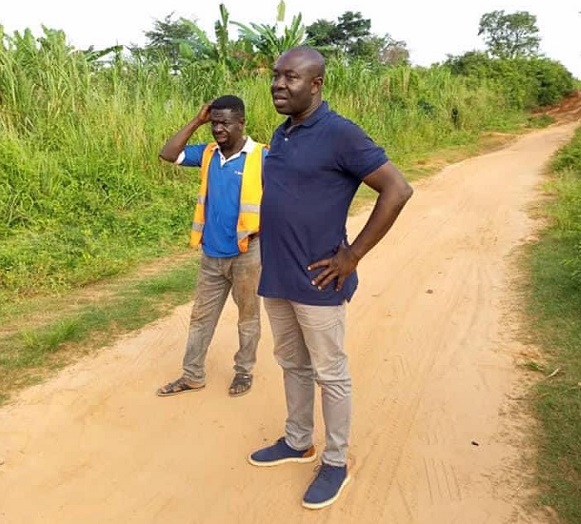 “I just want to improve the nature of the road because the farmers have started harvesting their yam and would need a passable road to transport their produce to market centres,” Mr Agyekum stated.

He appealed to the government to get involved in the construction of the road, saying, “The tarring of this road is long overdue and the people of Asonkwaa and its surrounding communities are suffering.”

The Assemblyman of the Asonkwaa Electoral Area, Prince Dakuanam, commended the Daily Graphic for its publications that brought to light the plight of the people of Asonkwaa and its surrounding communities.

He explained that the paper’s publication had finally brought smiles and joy to the faces of the farmers
and the residents of the area who used the road to seek medical care and other social services in Techiman or Nkoranza.

Mr Dakuanam also thanked Mr Agyekum for his gesture, which he said came at the right time when the farmers had started harvesting their yam.

He explained that the reshaping of the road would revive socio-economic activities in the area.