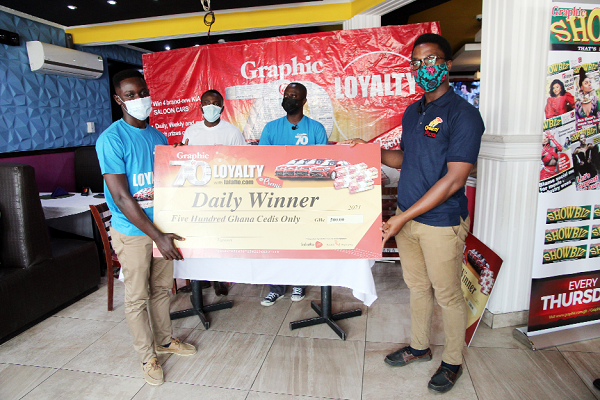 The Graphic Communications Group Limited (GCGL) has presented cash prizes to over 100 of its loyal readers who participated in the [email protected] Loyalty Promo.

The cash prizes were given out as reward for the daily and monthly winners, with the ultimate prizes to be won at the end of the promotion being four new KIA Pegas sedan cars.

The promo is being sponsored by RANA Motors.

The over 100 winners emerged from the second draw held at Cheezzy Pizza in Accra yesterday.

Each of them was rewarded for accumulating a minimum of 2,000 points between December 2020 and January this year.

At the same event yesterday, one of the monthly winners in the first draw, Mr Francis Logah, was presented with a cheque for GH¢2,500.

The first draw of the promo took place in December last year, with 70 winners, made up of 68 daily winners and two monthly winners for October, emerging.

Yesterday’s draw was conducted by the Sales and Circulation Manager of the GCGL, Mr Kwaku Tweneboah Ofosu, and a team from Afrifanom, formerly known as Vokacom, the technology partners for the promotion

With coronavirus disease (COVID-19) protocols being observed, only potential winners were present at the event, while live-streaming was done via Facebook.

Mr Ofosu, in a short remark, pointed out there were no grounds for favouritism in the draw, as the selection process was being streamed live.

He said winners who were not present at the draw would be contacted and their prize money sent to them via mobile money transfer.

He encouraged participants not to relent but keep on accumulating points to enable them to enter the grand draw.

Mr Logah, who couldn’t control his excitement, said he was taken aback when his name was mentioned as part of the winners.

He said although he had participated in the promo, he was only taking his chance, considering the number of readers the newspaper had.

“Graphic has been my favourite newspaper and so when I heard about the draw, I quickly decided to participate. I didn’t hope to win; I was just participating so that I wouldn’t feel I’d been left out as a loyal customer,” he said.

The promotion, currently available to customers on the MTN and Vodafone networks, vendors and Graphic App users is part of the 70th-anniversary celebration of the GCGL, commemorated last year.

Readers of any of the GCGL's brands — the Daily Graphic, The Mirror, Graphic Sports, Graphic Showbiz, Graphic Business, Junior Graphic and Graphic Online — are rewarded daily, weekly and quarterly with prizes worth over GH¢1 million.

The names of the winners from the first draw, conducted last December for the months of October and November, will be published for them to receive their cash prizes via electronic means, as their contacts have been confirmed.

To qualify, participants have to accumulate more points by views of live music performances on Lalafio.com. The more views accumulated, the more points are accumulated towards winning a car.