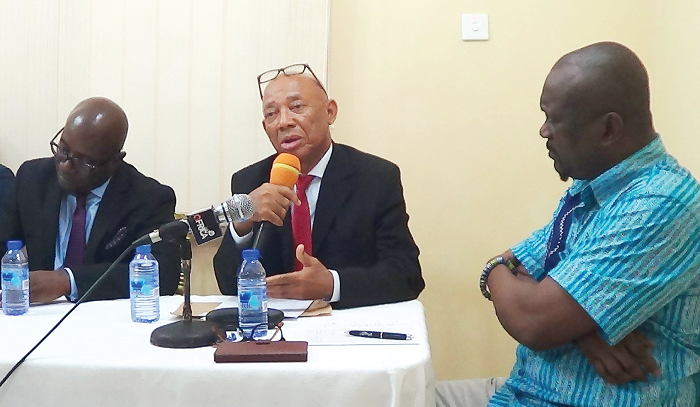 Ghana   has been asked to clearly state whether or not it will remain a member of the International Criminal Court (ICC) following threats by the African Union (AU) to withdraw from that court.

The AU has accused the ICC of targeting only Africans and African leaders for prosecution, hence the threat to withdraw its membership from the court.

The call for Ghana to state its position was made at a roundtable discussion on Africa and the ICC, organised by the Africa Centre for International Law and Accountability (ACILA) in Accra.

The  panel that led the discussions was made up of a former judge of the United Nations International Criminal Tribunal for Rwanda, Mr Emile Francis Short; a legal and governance consultant, Mr Henry Kwesi Prempeh; a transitional justice expert, Dr Franklin Oduro, and the Executive Director of ACILA, Mr William Nyarko.

Mr Short, also a former Commissioner of the Commission on Human Rights and Administrative Justice (CHRAJ), asked the current government to state its intention as to whether it would withdraw Ghana’s membership of ICC, having touted itself as the doyen of the rule of law.

He dismissed allegations of the ICC being bias against Africa, saying those allegations did not represent the facts and that the AU was only emotive about the ICC, instead of holding constructive discussions about the court.

Mr Short stated that there was no justification for the AU to withdraw from the ICC and that the AU should rather get justice for African victims instead of concerning itself with getting immunity for serving African heads of state.

He, however, called for reforms at the UN Security Council to make it possible for some world leaders from the so-called big powers to be referred to the ICC.

“I am looking forward to the day when the ICC will conclude investigations into a non-African leader to correct the perception of bias against Africa,” Mr Short added.

Dr Oduro, who is also the Deputy Director of CDD-Ghana, described the AU’s withdrawal threat as an affront to the fight against injustice.

He indicated that although the AU might have legitimate concerns, having majority of cases tried by the ICC from Africa, three African leaders on trial out of the lot could not be said to be targeted at Africa.

Dr Oduro said he wanted the AU to maintain its membership of the ICC and rather fight for reforms, saying the continental institutions were not strong enough and, therefore, leaving the ICC would worsen the plight of victims of human rights abuses.

Mr Prempeh expressed concern about the silence of the AU concerning Africans drowning in the Mediterranean, but was quick to talk about heads of state being charged by the ICC.

He said the claim by the AU that the ICC was unfair to Africa only had a superficial merit, given that the majority of cases prosecuted involved Africans.

“Our leaders have been very opportunistic because they know how to effectively use the race cards to their advantage. If Africa fixes its domestic court systems and puts other systems in place, we will have the capacity to investigate issues fairly,” Mr Prempeh indicated.

Contributing to the discussions, Mr Nyarko said it was the responsibility of states to ensure that crimes committed within their jurisdictions were properly investigated and prosecuted, except in cases where a state had no legal infrastructure to do so.

He called for continuous dialogue to get justice for victims of human rights.

The Dutch Ambassador to Ghana, Mr Ron Strikker, said the Netherlands supported the ICC very strongly and welcomed a discussion from the AU on their concerns to amicably settle the issue.

The ICC investigates and, where warranted, tries individuals charged with the gravest crimes against humanity such as genocide and war crimes.

It started work on July 1, 2002 when the Rome Statute, a multilateral treaty, came into force.