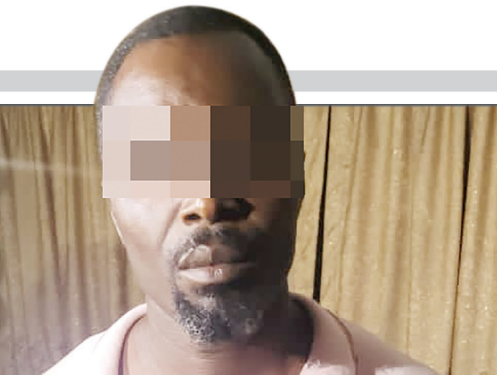 The 47-year-old businessman and father, Evans Oppong, said to have allegedly attempted to use his daughter for money rituals was on Monday arraigned at the District Court in Accra (Domestic Violence and Victims Support Unit) charged with preparation to commit crime to wit murder. Follow @Graphicgh

The 11-year-old girl whose father had allegedly attempted to use her for money rituals, had jokingly told her mother last Tuesday that, her father was going to use her for sacrifice.

This jovial incident happened between mother and daughter on Tuesday [May 31, 2022], three days before the girl was picked on Friday [June 3, 2022] for the said money rituals at Oyibi in Accra.

The girl's jovial statement came after her mother had told her that, she had just spoken to her father on telephone, and the father had repeatedly asked if she was called Yaa, a Thursday born.

Once she confirmed repeatedly, her father said he was going to come for her on Thursday and ended the telephone call.

The mother then asked her why she thought the father would repeatedly ask if she was called Yaa, and had decided to come pick her out on Thursday.

The 11-year-old girl then jokingly told her mother that it was possible her father was going to use her for money rituals considering the Thursday he had booked the appointment was a soul day for Yaa – the Akan female name for people born on Thursday.

They both laughed jovially about the narrative and retired to bed that night.

This is what the mother of the girl told GTV in a television interview monitored by Graphic Online from her home near Amasaman in Greater Accra.

The 47-year-old businessman and father, Evans Oppong, said to have allegedly attempted to use his daughter for money rituals was on Monday arraigned at the District Court in Accra (Domestic Violence and Victims Support Unit) charged with preparation to commit crime to wit murder.

His plea was not taken and the court presided over by Ama Adomako Kwakye, remanded him in police custody.

The remand, is to enable the police to conduct further investigations into the matter.

The court also ordered the police to allow the suspect’s lawyer have access to him on Tuesdays and Thursdays.

What mother of girl told GTV

In the GTV interview, the mother said Oppong called last week Tuesday around 10pm that a friend of his was in town and he was about travelling back to abroad and so he wanted to take the measurements of the girl so that he can get her new cloths and buy shoes for her as well.

After Oppong ended the phone call, she claimed she pondered a few minutes and then moved to the daughter who was then not asleep as she was even the one who handed over the mobile phone when the call came through.

When she informed her about what the father had said, and asked for her thoughts on why the father will be asking repeatedly if she was called Yaa, her reaction was that her father was probably going to use her for money rituals and they jokingly laughed over it, the mother said in the GTV interview monitored by Graphic Online.

On Wednesday [June 1, 2022] in the market, the mother said she discussed the issue with her friends in the market but gave the narrative as that of a case of a friend of hers and did not initially tell them it was her own case.

It was after that narrative that she confessed to them that it was her own story and that, that is what her daughter's father had planned, and wanted to take her out on Thursday.

Nothing happened on Thursday

She said the girl went to school on Thursday, and the father did not go pick her up.

He called around 3pm to know if she had returned from school and decided to postpone to Friday [June 3, 2022].

On Friday morning, he called around 6:30am when the girl was almost ready for school and the girl spoke to the father on telephone and said they normally get plenty homework from school on Fridays and so if they go, she may miss her homework.

But the father assured that they will return early for her to get back to school.

Her elder sister took her along for them to meet the father at Amasaman.

Before they left the house, the mother advised her not to accept any food or water from the father.

She also advised her to be on the look out, not to sleep in the car, not to take off her cloths and scream for help if she suspected anything unusual.

They therefore left and she did not receive any phone call from the father.

The next time there was a phone call was around 11:30am on the Friday [June 3] and it was the phone call from the police informing her of what had happened.

Watch parts of the GTV interview with the mother below

The facts as presented by Chief Inspector Richard Amoah were that, the suspect Evans Oppong is the father of victim (name withheld) aged 11 years.

He said, the suspect had been living in Holland for many years but relocated to Ghana a year ago.

The prosecutor told the court that, in May, 2022, the suspect discussed with a friend known as Kwame that he was facing financial difficulties.

C/Insp. Amoah told the court that, the friend suggested that the suspect will need a spiritual cleansing to turn things around for him.

He added that, the friend later introduced the suspect to one Nana Fosu a.k.a. Nana K.K to assist him see a Spiritualist for help.

He said on May 29, Nana Fosu took the suspect to Nana Adu-Boafo Jnr, who is a spiritualist and a herbalist at Oyibi Kon for money rituals.

However, the prosecutor said the suspect later informed the spiritualist that he was afraid of snakes as such he will come to him for further discussions on what to do.

“The spiritualist feigned interest and told the suspect to furnish him with the date of births of his last two children to enable him determine which of them will be suitable for the sacrifice,” the prosecutor said.

The prosecutor said on May 31, the suspect rang the victim’s mother to confirm the day the victim was born and told her that he will pick up the victim to be taken to a friend who had returned from abroad for measurement so that a dress will be sewn for her.

“The suspect furnished the spiritualist with the date of births as requested.

The spiritualist then alerted the Oyibi Police about the intended human sacrifice by the suspect and the Police urged him to play along with the suspect so he could be arrested when he produces the child at the herbal centre for the said sacrifice,” he said.

He added that, the spiritualist later informed the suspect that he had spiritually checked on the date of births of the two children and that the victim will be suitable for the sacrifice.

He said, the spiritualist instructed the suspect to bring the victim to his herbal centre on June 3, 2022.

On June 3, 2022, the suspect rang his elder brother to release his car to visit a herbal centre for treatment as a result of a car accident he had recently.

He said that morning around 8:00 a.m, the elder brother released the vehicle to his son to go and pick the suspect to the herbal centre and on their way to said herbal centre, and they picked the victim at Amasaman.

“At a spot at Oyibi suspect asked the driver to wait for him and he took over the car and the suspect later stopped and bought three “Ghana must go” bags and two bottles of schnapps.

“The suspect arrived at the herbal centre with the victim and she was instructed by the spiritualist to sit in the hall whilst the suspect was also instructed to change his clothing on the compound and was later given a white calico to tie around his waist,” he added.

The suspect, according to the prosecutor, was then given a concoction to bath and in the course of that, the spiritualist called in the Oyibi Police who came and arrested him and rescued the victim. Investigation is on-going,” the prosecutor told the court.

Related: Man who offered daughter to be killed for money rituals arrested