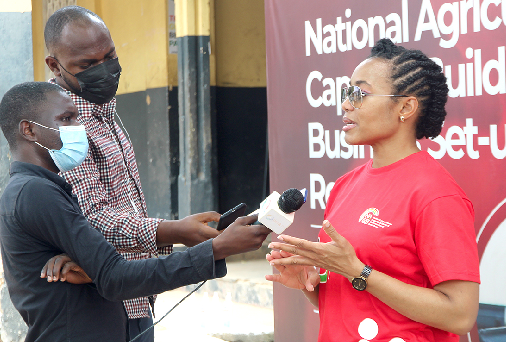 Ms. Zanetor Rawlings (right), MP for Klottey Korle Constituency, being interviewed by some journalists at the event. Picture: ESTHER ADJEI

The Member of Parliament for Korle Klottey, Dr. Zanetor Rawlings, has encouraged the youth to enter agriculture to help reduce over-reliance on the government for employment.

She noted that majority of the youth did not see the agricultural sector as an area for a sustainable and lucrative career opportunity, indicating that there were huge opportunities in the sector that could absorb thousands of the unemployed youth.

“It’s not possible for the government to provide jobs for 30 million people and even in times of mass recruitment, only few people get selected, therefore, the country must recognise agriculture as a source of growth and a major employer,” she said.

Dr. Rawlings was speaking in Accra last Saturday at the screening and shortlisting of beneficiaries for the National Agricultural Capacity Building and Business Setup Roadshow (NAGRICA).

The project which is being implemented by Agrihouse Foundation seeks to train and support the setup of rabbit and mushroom businesses for 200 individuals in each region over a 36-month period.

Its main objective is to empower the vulnerable in society to help lessen the economic hardship in the country.

Dr. Rawlings explained that the initiative formed part of efforts to address challenges confronting the agriculture sector, as the COVID-19 pandemic had further heightened the economic predicament of the youth and vulnerable people.

“The idea is to empower young people in agriculture and agribusiness. We’re trying to create a paradigm shift where people will not look at farming as just for the elderly in the village but a sector that can create employment and support young people, women and persons with disability to earn money even in the midst of a pandemic or an economic downturn”, she noted.

She said the choice of rabbit and mushroom was that apart from the health benefits, they did not require any extreme technical expertise, a huge deal of training or extended area of land.

Another objective of the project, she said, was to take the concern about whether or not all people should have financial capacity to start an agricultural project.

“Starting a farm can be so capital intensive that a lot of people who will be so much interested can’t dream of starting because they don’t have the money, we want to remove the financial concern from people’s interest and commitment by providing them with tools to make their dreams come through,” Dr. Rawlings said.

The Executive Director for Agrihouse Foundation, Alberta Nana Akyaa Akosa, said the foundation recognised the challenges faced by vulnerable women and persons with disabilities, especially being disadvantaged regarding employment.

“We appreciate the challenges but we also believe it is possible for us to train and support the setup of rabbit and mushroom businesses for 200 individuals in each region over a 36-month period,” she said.

“At Agrihouse Foundation, we consider this project a scale-up of our annual Agricultural Students Mentorship Programme which seeks to build entrepreneurs in Agriculture,” she added.