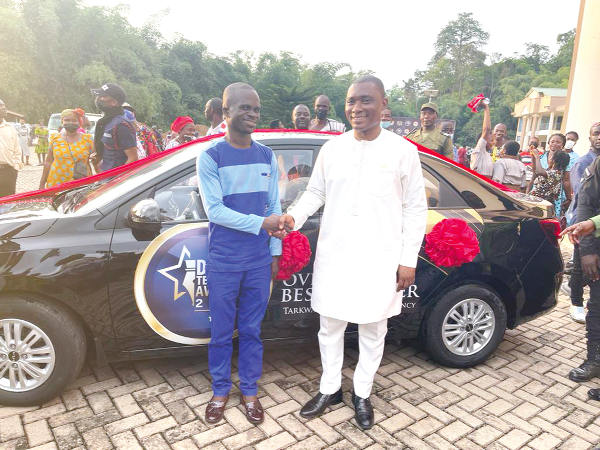 The New Patriotic Party (NPP) Member of Parliament (MP) for Tarkwa-Nsuaem, George Mireku Duker, has rewarded 11 teachers in the constituency for their dedicated and meritorious service.

At the Teachers Awards Day, which the MP instituted in fulfilment of a promise he made to teachers, the award winners from basic and second cycle schools in the constituency, received refrigerators, water dispensers and 50-inch Samsung televisions as gifts.

Vida Asare prevailed as the best head teacher. The second and third places were picked by Vivian Kudzoszi and Yaw Beyuo respectively.

Addressing the gathering at the event on Monday, March 8, 2022, Mr Duker, who is also the Deputy Minister of Lands and Natural Resources in charge of Mines, could not hide his pride with the work by all the teachers in the constituency.

He indicated that the awards had now been institutionalised and would be held annually to recognise their role in shaping the future of the children in the constituency.

Mr Duker announced the setting up of the Tarkwa-Nsuaem Teachers’ Fund that would, among other things, sustain the awards scheme.

The purpose of establishing such a fund was to help address genuine pressing needs of teachers in the municipality.

According to him, since assuming the role of MP, education had remained a priority and he had demonstrated his commitment to improving the standard of education in the constituency.

Mr Duker described education as a tool for sustainable growth.

In that respect, he said, he had put in efforts to ensure the construction of classroom blocks, donation of motorbikes, mathematical sets, furniture, computers, building materials and other items to boost education.