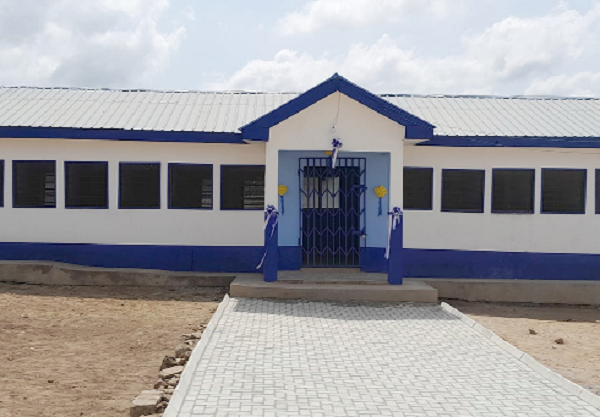 The new 30-seater water closet place of convenience for females in the school
30.5k Shares

Female students of the New Juaben Senior High School (SHS) in Koforidua in the Eastern Region who used to contract candidiasis due to their use of an unhygienic place of convenience now have a decent one built at the cost of GH¢75,000.

Previously, the over 1,200 female students were using a rundown place of convenience not suitable for human beings, especially teenage girls in the school.

This situation became a fertile ground for many of the school girls to contract candidiasis and other related infections, as a result of which they had to go home for medical treatment.

That had made them irregular in class, which consequently had a negative impact on their studies.

Realising the situation confronting the girls, the Parent-Teacher Association (PTA) started constructing a modern place of convenience but could not complete it, and the old students came to their rescue to finish the 30-seater water closet place of convenience.

At a short ceremony to hand over the facility to the school last Tuesday, the Project Coordinator of the 1981 Year Group, Hetty Annoh-Quarshie, who represented the President of the old students association, Isaac Tettey, said the old students were touched by the insanitary conditions the girls were going through and decided to complete the project on time because of the delay by the PTA in completing it.

Mrs Annoh-Quarshie said the project was under construction before the PTA took over but they could not also complete it, and that compelled the old students to also take over and complete it.

She said since the government alone could not provide all the facilities in the school, the old students would be teaming up with the headmaster to provide the needed facilities.

That, Mrs Annoh-Quarshie indicated, would make life comfortable for the students and enhance teaching and learning.

The Headmaster of the school, Mark Ofori Frempong, said the new facility would certainly bring to an end infections experienced by the students due to their reliance on the old and unhygienic place of convenience.

He also enumerated some challenges of the school such as limited number of teachers and lack of accommodation facilities for the teachers to enable them to stay within the school premises to supervise the students very well.

Mr Frempong commended the government for constructing a wall around the school, as well as the old students for completing the place of convenience.

The Girls’ Prefect, Cynthia Akrofi Apeadua, told the Daily Graphic that female students were frequently being infected with candidiasis and that had been adversely affecting their menstrual cycles.

The Health Prefect, Doreen Korkor Tetteh, said because they had not been having their regular monthly flow, it had been affecting them psychologically and mentally disturbed them, which had in turn affected their studies.