Select Committee on Education to invite contractors for shoddy work 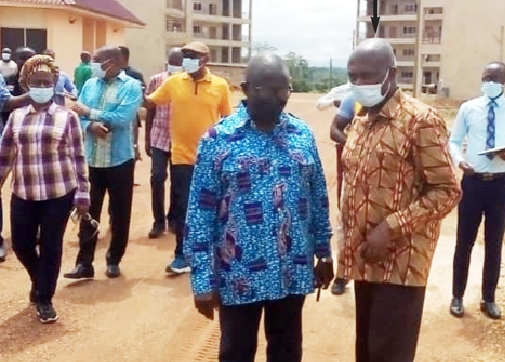 Dr. Samuel Addai (arrowed), Consultant of the Abomosu Model SHS project, explaining the work done so far to Mr. Kwabena Amankwa Asiamah, Chairman of the Parliamentary Select Committee on Education. Looking on are other members of the committee

The Parliamentary Select Committee on Education has expressed satisfaction with the ongoing educational infrastructural facilities at Abomosu Model Senior High School in the Atiwa West District of the Eastern Region.

The projects, which include classroom blocks, assembly hall, dining hall, male and female dormitories, library, science laboratory, staff quarters, places of convenience and urinary, which are being undertaken through the Ghana Education Trust Fund (GETFund) are 90 per cent complete.

The committee, however, was not satisfied with a number of facilities being constructed by the GETFund in three other senior high schools (SHSs).

The Chairman of the committee, Mr. Kwabena Amankwa Asiamah, said the contractors and consultants of the shoddily executed projects would be hauled before the committee to explain why the works were below standard.

The committee members were on an inspection tour to some selected SHSs in the Eastern Region to appraise the state of the projects which were being undertaken by the GETFUND.

Briefing journalists after the inspection tour of the projects, Mr. Amankwa Asiamah, said the government was doing its best to provide and improve educational facilities in SHSs but regretted that while some of the contractors and consultants were doing a good job, others were, however, not performing to satisfaction.

According to him, the contractor working on the projects at the three SHS must be brought to book for doing a bad job.

"The terrazzo work is poor and the finishing is getting bad. We are sure he has been paid some money but what he has done is bad and he must be brought to book.

"Apart from that, he will not be completing the work on schedule", the chairman of the committee stated.

The Ranking Member of the Committee, Mr. Peter Nortsu-Kotoe, for his part, admonished the consultant working on the three SHS, where the construction work had been bad, to ensure that the contractor worked to satisfaction.

He, therefore, advised the consultant to ensure that the contractor corrected all faults within the projects.

Mr. Nortsu-Kotoe also expressed concern about the unfair distribution of projects in SHS across the country, explaining that while some of the SHS had more projects, others had few, which, according to him, must be corrected.

He expressed the committee's appreciation to GETFUND for ensuring that the committee inspected its ongoing projects within the SHSs.

The consultant working on the three projects, Mr. Kwabena Adjei Sefah, who was unable to tell the committee the cost of the three projects his outfit was supervising, indicated that he would furnish them the cost later since he did not have the figures with him now.

"You are looking for very high quality of delivery, sometimes the money needed to do that is not also commensurate and makes it difficult for contractors to work very well.

“Cost variations are what also affect the expansion of the projects. Let's look at the regime of our pricing again so we will be able to get these challenges addressed when they come up", the consultant said.