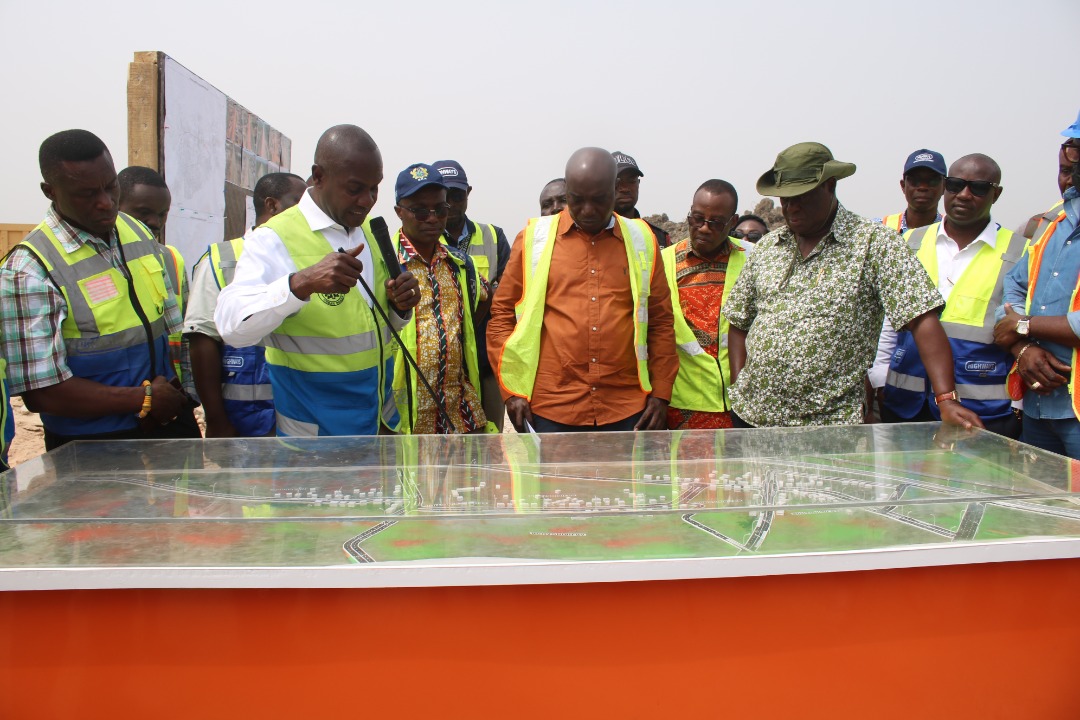 The Mr Amoako-Atta (wearing a hat) inspecting the quality control laboratory set up by First Sky Construction at the Kitase site. With him are Alhaji Abass Awulo (3rd from right), the Chief Director of the ministry, and other officials of the Ghana Highway Authority and the Department of Urban Roads. Pictures: DELLA RUSSEL OCLOO
30.5k Shares

The Minister of Roads and Highways, Kwasi Amoako-Atta, has said the government will continue to meet its public commitment to significant road infrastructural projects.

He said improving the road transport sector remained key to the government's quest to ensure there were no constraints to productivity while increasing the country's competitiveness.

Speaking during a tour of some key road projects in Accra and Kitase in the Eastern Region on Wednesday, he said the ongoing projects were commitments of the government to improve people's lives.

During the tour, the minister and his team of directors from the ministry, the Department of Urban Roads and the Ghana Highway Authority (GHA) inspected the progress of work on the 23-km Dome-Kitase road being rehabilitated by First Sky Construction Limited.

The team also inspected work on the 5.80-km road from the Ashaley Botwe School Junction through Borteyman linking the Tema Motorway aimed to provide access to the new Olympic sized stadium under construction to host the 13th edition of the All African Games later this year. 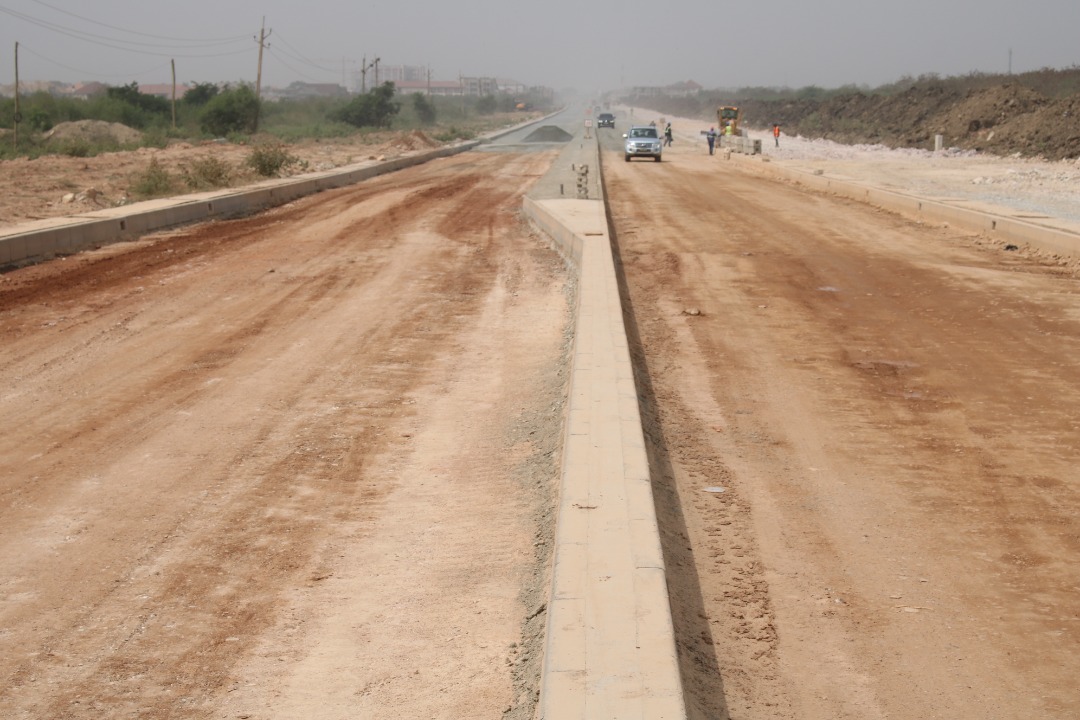 The 5.80-km road from the Ashaley Botwe School Junction through Borteyman linking the Tema Motorway

The Dome-Kitase stretch being constructed at the cost of US$35 million has had the earthwork done, with work on the drainage system also nearing completion.

The Executive Chairman of First Sky, Eric Seddy Kutortse, informed the minister that the vertical alignment works had also been completed, bringing work to about four months ahead of schedule.

He said the relocation of utilities within the project's right of way and the delay in the payment of compensation to the affected persons were among challenges facing the contractors. 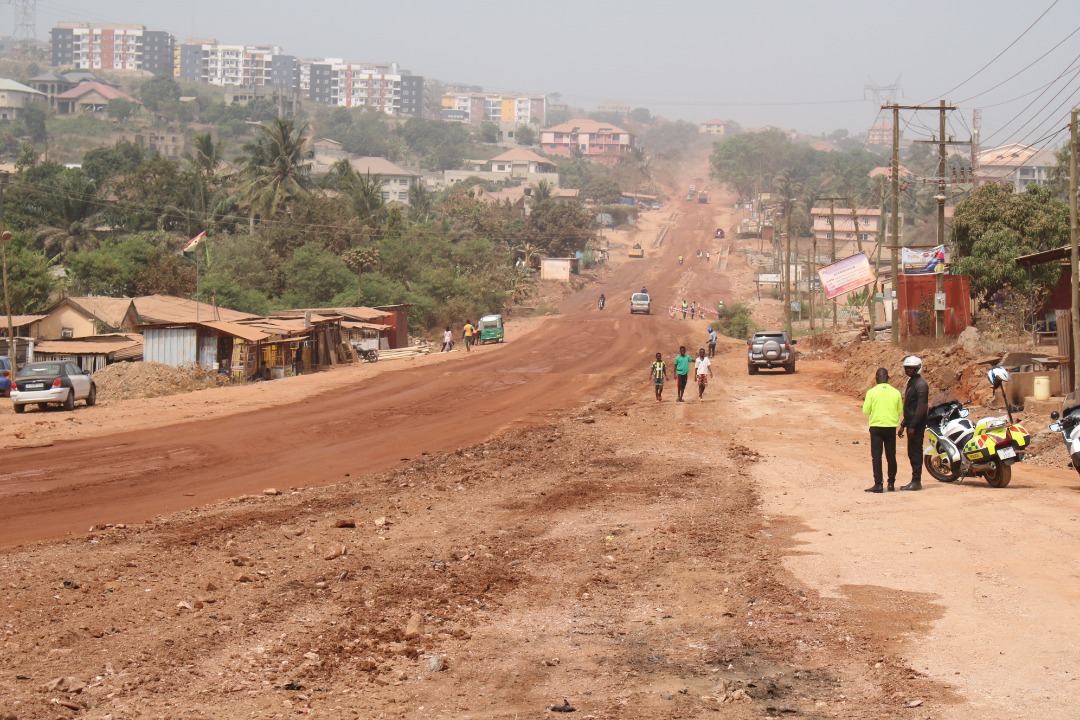 The Kitase road is under construction. PICTURES BY DELLA RUSSEL OCLOO

At Borteyman, the work, according to the contractors, Humphery Williams of Oswal Investment Group, was about 65 per cent completed.

He said service roads from the Borteyman enclave linking Nmai Dzorn in the Adentan Municipality were also being worked on.

Cumulative quantities of work so far indicated 9.40km of 600mm of covered concrete drainage systems, U-Drains 1,200 millimetres of concrete pipe culverts, among other facilities, bringing the total drainage construction to about 76 per cent completion.

For his part, the Director of the Department of Urban Roads, James Amoo-Gottfried, briefed the minister that dust and the nuisance from noise were risks the project posed to the animals due to the project's proximity to the Animal Husbandry establishment.

He said they were engaging the Ministry of Food and Agriculture for a temporary relocation of the animals and some of the structures within the right of way of the project.

Mr Amoako-Atta expressed satisfaction with the work done at the two sites and commended the two contractors and the consultants for working during the Christmas holidays to significantly improve the project delivery time.

He also announced that the ministry would streamline the classification of contractors to ensure they worked within their capabilities.