Roads in Bekwai get facelift

Roads being tarred at the Fishpond area in Bekwai

After more than five decades of neglect, complaints and threats of demonstrating against various governments, roads in the Bekwai Municipality in the Ashanti Region are undergoing a massive facelift.

Currently, five contractors are working at various locations covering a distance of more than 80 kilometres.

All the roads can best be described as categories in the urban and feeder roads system due to the fact that they basically connect roads from the various farming communities to the Bekwai Municipality.

There are also other construction works in the highway category from Anwiankwanta to Ahwiaa on the Obuasi-Dunkwa highway.

A grader working on the Kensere-Pampaso road

Impact on life in the constituency

The Municipal Chief Executive for Bekwai (MCE), Mr Kwaku Kyei Baffour, said the massive road works currently ongoing in the municipality was in fulfilment of a promise made by President Nana Addo Dankwa Akufo-Addo during the 2016 election campaign.

He explained that the fulfilment of the promise was a dream come true to the people who have yearned for such development of roads in the area.

Again, the MCE stated that upon completion, the road construction would help beautify the various communities they were located in, boost local economies since the people would be able to move round with ease to transact business.

The MCE said apart from the beautification of the various communities, the road construction would enhance easy transportation of foodstuffs from the hinterlands to the various markets in the region and beyond.

The Member of Parliament for Bekwai, Mr Joseph Osei-Owusu, was hopeful that after completion of the roads, they would help improve the standard of living of the people in the municipality.

He assured the people that the Akufo-Addo-led government would ensure that every community benefitted from the national cake irrespective of political, ethnic, religion, social and other affiliation.

He reminded the people of the need to have faith in the current administration so they would do more for their communities and the rest of the country.

Construction of Pampaso road in progress

The strategic location of the Bekwai Municipality is worth noting, especially with some of its roads linking the Ashanti Region to the Central and Western regions among others.

Notable among its major link roads are the Kumasi-Cape Coast road which passes through the Bekwai Municipality, the Kumasi-Anwiankwanta-Takoradi road as well as the Anwiankwanta to Manso Nkwanta road, which links up part of the Western Region.

The transportation of large quantities of timber, cocoa and other goods across communities in the Bekwai Municipality has in the past few decades exposed roads in the area to destruction.

Apart from the destruction of the main roads, however, there were several feeder roads in the municipality which were also in very deplorable state due to neglect for years. 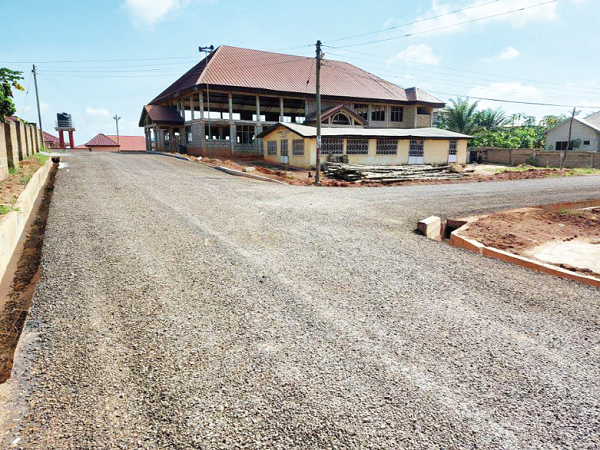 A stretch of roads at Serwaaba

People in the Bekwai Municipality are predominantly into agri-business from the various levels such as the cultivation of various crops and rearing of animals, trading, transformation of agro-products and the final distribution of agro products to various regions in the country. The major challenge confronting the people in the municipality is lack of industries which could create jobs for the youth.