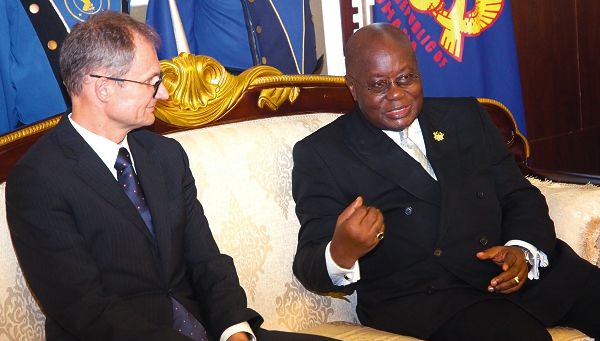 President Nana Addo Dankwa Akufo-Addo Tuesday received the letters of credence of four envoys, with a call on them to encourage the private sector in their respective countries to partner their Ghanaian counterparts to add value to Ghana’s diverse resources.

According to the President, Ghana had embarked on an industrial and economic transformation initiative and was looking for partners to support its efforts at becoming an industrial hub on the continent.

Receiving them, President Akufo-Addo said Ghana had made a commitment to move from being the exporter of raw materials to exporter of finished or semi-finished products to earn real value for its resources, in line with the industrial and socio-economic development vision of the government within the next 10 years.

Receiving the Swiss Envoy, the President said relations between the two countries dated back to the beginning of the 19th century when the Basel Missionaries first came to Ghana, bringing about positive development on their arrival, including the translation of the Bible into local dialects and the establishment of some of the best schools in the country.

He said the relationship had since grown and extended to trade and support to other sectors of national development.

Receiving the credentials of the Botswanan High Commissioner, President Akufo-Addo called for better ways of strengthening trade relations between the two countries and urged Botswana to support Ghana’s bid to host the Africa Free Trade Secretariat.

When he got to the turn of the New Zealand Envoy, the President said he had taken a keen interest in the revival of New Zealand’s agricultural sector, especially livestock farming.

He expressed the hope that with its strong industrial base in that sector, New Zealand would be willing to share experiences with Ghana.

Receiving the Pakistani High Commissioner, President Akufo-Addo said Ghana had embarked on industrial and economic transformation and was looking for partners and friends who could join it on the industrial journey.

Mr Stalder wished Ghana the best in the ongoing African Cup of Nations (AFCON) tournament and said Ghana and Switzerland had had strong bonds dating back many years, resulting in the visit of the President of Switzerland to Ghana and that of Ghana to his country.

He said the cooperation had extended to trade and investments, including support to peace initiatives.

According to him, Ghana was one of the top three trading partners of Switzerland in Africa.

Mr Mphothwe described Ghana as a strategic partner due to its pivotal role during the formative years of Botswana.

She said the partnership included Ghanaian professionals being sent to help in the educational, health and judicial sectors of his country.

“Almost all of my generation passed through the hands of Ghanaian teachers,” he said, adding that they were also taken through training in diplomacy.

Mr Ramsden said his country would be excited to learn that Ghana wanted to use its links in the Commonwealth for trade collaborations.

Major Gen. Kingravi (retd) indicated that Pakistanis had a long-standing relationship with Ghana and pledged to work to scale up the relations and increase interactions between his country and Ghana, especially in the area of trade.

He extended an invitation to President Akufo-Addo to visit Pakistan.